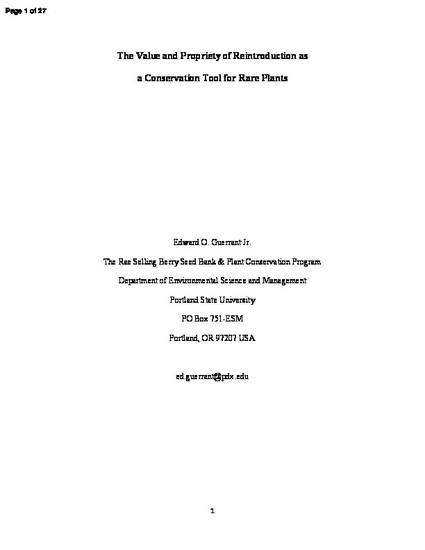 Three recent reviews of reintroduction for conservation purposes, which draw on substantial and largely non-overlapping data sets, have come to strikingly different conclusions about its value. One concludes that “reintroduction is generally unlikely to be a successful conservation strategy as currently conducted.” Another that “…this review cannot conclusively comment on the effectiveness of re-introductions…” The third concludes there is “strong evidence in support of the notion that reintroduction, especially in combination with ex situ conservation, is a tool that can go a long way toward meeting the needs it was intended to address.” The argument over the conservation value of reintroduction is of more than academic interest. It illustrates a challenge facing land managers and decision makers who may be tempted to act on stated conclusions without thoroughly understanding their underlying assumptions, methodology and terminology. The differing conclusions can be partially explained by different criteria of what constitutes success, how to measure it, and differing time scales considered.

This is the Author's Original Manuscript of an article whose final and definitive form, the Version of Record, has been published in Botany and can be found online at: http://www.nrcresearchpress.com/loi/cjb