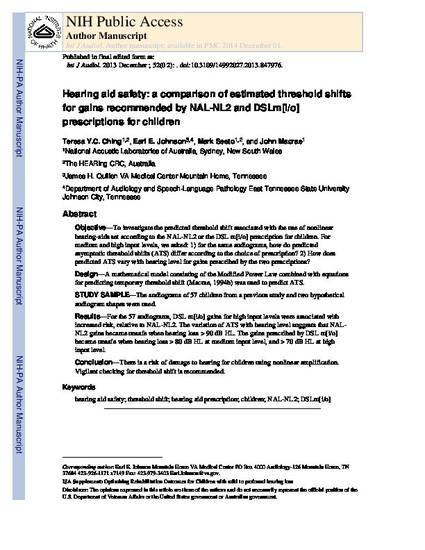 Objective: To investigate the predicted threshold shift associated with the use of nonlinear hearing aids fitted to the NAL-NL2 or the DSL m[i/o] prescription for children with the same audiograms. For medium and high input levels, we asked: (1) How does predicted asymptotic threshold shifts (ATS) differ according to the choice of prescription? (2) How does predicted ATS vary with hearing level for gains prescribed by the two prescriptions? Design: A mathematical model consisting of the modified power law combined with equations for predicting temporary threshold shift (Macrae, 1994b) was used to predict ATS. Study sample: Predicted threshold shift were determined for 57 audiograms at medium and high input levels. Results: For the 57 audiograms, DSL m[i/o] gains for high input levels were associated with increased risk relative to NAL-NL2. The variation of ATS with hearing level suggests that NAL-NL2 gains became unsafe when hearing loss > 90 dB HL. The gains prescribed by DSL m[i/o] became unsafe when hearing loss > 80 dB HL at a medium input level, and > 70 dB HL at a high input level. Conclusion: There is a risk of damage to hearing for children using nonlinear amplification. Vigilant checking for threshold shift is recommended.

This document is an author manuscript from PMC. The publisher's final edited version of this article is available at International Journal of Audiology.