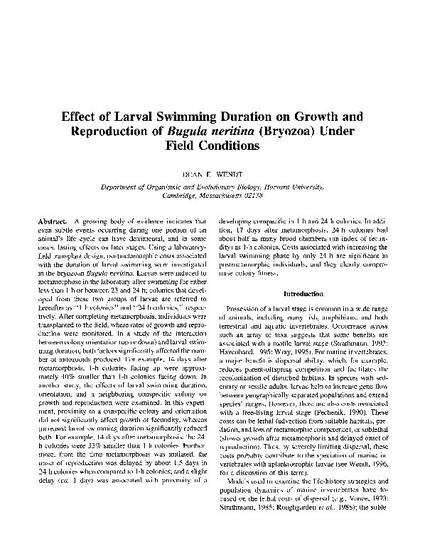 Article
Effect of Larval Swimming Duration on Growth and Reproduction of Bugula neritina (Bryozoa) Under Field Conditions
The Biological Bulletin
Download
Publication Date
Abstract
A growing body of evidence indicates that even subtle events occurring during one portion of an animal's life cycle can have detrimental, and in some cases, lasting effects on later stages. Using a laboratory-field transplant design, postmetamorphic costs associated with the duration of larval swimming were investigated in the bryozoan Bugula neritina. Larvae were induced to metamorphose in the laboratory after swimming for either less than 1 h or between 23 and 24 h; colonies that developed from these two groups of larvae are referred to hereafter as "1-h colonies" and "24-h colonies," respectively. After completing metamorphosis, individuals were transplanted to the field, where rates of growth and reproduction were monitored. In a study of the interaction between colony orientation (up or down) and larval swimming duration, both factors significantly affected the number of autozooids produced. For example, 14 days after metamorphosis, 1-h colonies facing up were approximately 40% smaller than 1-h colonies facing down. In another study, the effects of larval swimming duration, orientation, and a neighboring conspecific colony on growth and reproduction were examined. In this experiment, proximity to a conspecific colony and orientation did not significantly affect growth or fecundity, whereas increased larval swimming duration significantly reduced both. For example, 14 days after metamorphosis, the 24-h colonies were 35% smaller than 1-h colonies. Furthermore, from the time metamorphosis was initiated, the onset of reproduction was delayed by about 1.5 days in 24-h colonies when compared to 1-h colonies; and a slight delay (ca. 1 day) was associated with proximity of a developing conspecific in 1-h and 24-h colonies. In addition, 17 days after metamorphosis, 24-h colonies had about half as many brood chambers (an index of fecundity) as 1-h colonies. Costs associated with increasing the larval swimming phase by only 24 h are significant in postmetamorphic individuals, and they clearly compromise colony fitness.
Disciplines
Publisher statement

This is an author-produced electronic version of an article published in The Biological Bulletin in 1998, volume 195 pages 126-135. © Marine Biological Laboratory. The official version of the article is available at http://www.biolbull.org/cgi/reprint/195/2/126.