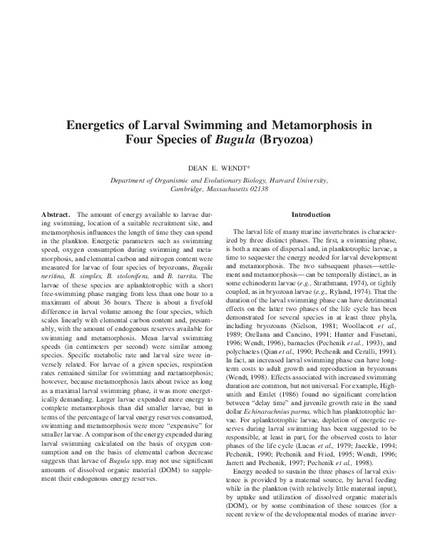 Article
Energetics of Larval Swimming and Metamorphosis in Four Species of Bugula (Bryozoa)
Biological Bulletin
Download
Publication Date
Abstract
The amount of energy available to larvae during swimming, location of a suitable recruitment site, and metamorphosis influences the length of time they can spend in the plankton. Energetic parameters such as swimming speed, oxygen consumption during swimming and metamorphosis, and elemental carbon and nitrogen content were measured for larvae of four species of bryozoans, Bugula neritina, B. simplex, B. stolonifera, and B. turrita. The larvae of these species are aplanktotrophic with a short free-swimming phase ranging from less than one hour to a maximum of about 36 hours. There is about a fivefold difference in larval volume among the four species, which scales linearly with elemental carbon content and, presumably, with the amount of endogenous reserves available for swimming and metamorphosis. Mean larval swimming speeds (in centimeters per second) were similar among species. Specific metabolic rate and larval size were inversely related. For larvae of a given species, respiration rates remained similar for swimming and metamorphosis; however, because metamorphosis lasts about twice as long as a maximal larval swimming phase, it was more energetically demanding. Larger larvae expended more energy to complete metamorphosis than did smaller larvae, but in terms of the percentage of larval energy reserves consumed, swimming and metamorphosis were more "expensive" for smaller larvae. A comparison of the energy expended during larval swimming calculated on the basis of oxygen consumption and on the basis of elemental carbon decrease suggests that larvae of Bugula spp. may not use significant amounts of dissolved organic material (DOM) to supplement their endogenous energy reserves.
Disciplines
Publisher statement

This is an author-produced electronic version of an article published in the The Biological Bulletin in 2000, volume 198, pages 346-356. © Marine Biological Laboratory. The official version of the article is available at http://www.biolbull.org/cgi/content/abstract/198/3/346.