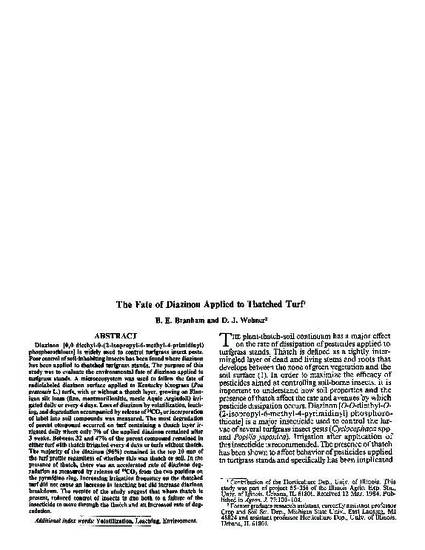 Diazinon (0,0-diethyl-0-(2-isopropyl-6-methyl-4-primidinyl) phosphorothioate) is widely used to control turfgrass insect pests. Poor control of soil-inhabiting insects has been found where diazinon has been applied to thatched turfgrass stands. The purpose of this study was to evaluate the environmental fate of diazinon applied to turfgrass stands. A microecosystem was used to follow the fate of radiolabeled diazinon surface applied to Kentucky bluegrass (Poa pratensis L.) turfs, with or without a thatch layer, growing on Flanigan silt loam (fine, montmorillonitic, mesic Aquic Argiudoll) irrigated daily or every 4 days. Loss of diazinon by volatilization, leaching, and degradation accompanied by release of 14CO2 or incorporation of label into soil compounds was measured. The most degradation of parent compound occurred on turf containing a thatch layer irrigated daily where only 7% of the applied diazinon remained after 3 weeks. Between 32 and 47% of the parent compound remained in either turf with thatch irrigated every 4 days or turfs without thatch. The majority of the diazinon (96%) remained in the top 10 mm of the turf profile regardless of whether this was thatch or soil. In the presence of thatch, there was an accelerated rate of diazinon degradation as measured by release of 14CO2 from the two position on the pyrmidine ring. Increasing irrigation frequency on the thatched turf did not cause an increase in leaching but did increase diazinon breakdown. The results of the study suggest that where thatch is present, reduced control of insects is due both to a failure of the insecticide to move through the thatch and an increased rate of degradation.