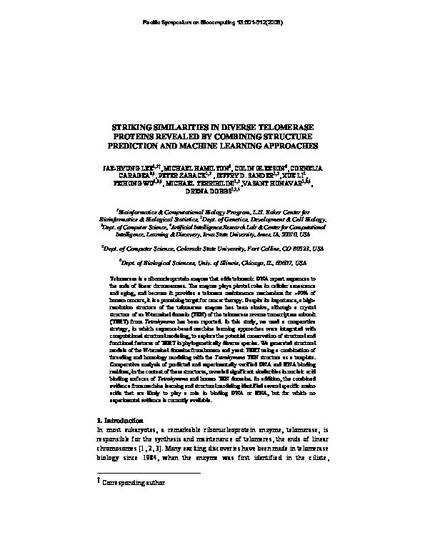 Article
Striking Similarities in Diverse Telomerase Proteins Revealed by Combining Structure Prediction and Machine Learning Approaches
Pacific Symposium on Biocomputing
Download
Document Type
Conference Proceeding
Disciplines
Conference
Pacific Symposium on Biocomputing
Publication Version
Published Version
Publication Date
Conference Title
Pacific Symposium on Biocomputing 2008
Conference Date
Geolocation
(20.1676868, -155.83228410000004)
Abstract
Telomerase is a ribonucleoprotein enzyme that adds telomeric DNA repeat sequences to the ends of linear chromosomes. The enzyme plays pivotal roles in cellular senescence and aging, and because it provides a telomere maintenance mechanism for ~90% of human cancers, it is a promising target for cancer therapy. Despite its importance, a highresolution structure of the telomerase enzyme has been elusive, although a crystal structure of an N-terminal domain (TEN) of the telomerase reverse transcriptase subunit (TERT) from Tetrahymena has been reported. In this study, we used a comparative strategy, in which sequence-based machine learning approaches were integrated with computational structural modeling, to explore the potential conservation of structural and functional features of TERT in phylogenetically diverse species. We generated structural models of the N-terminal domains from human and yeast TERT using a combination of threading and homology modeling with the Tetrahymena TEN structure as a template. Comparative analysis of predicted and experimentally verified DNA and RNA binding residues, in the context of these structures, revealed significant similarities in nucleic acid binding surfaces of Tetrahymena and human TEN domains. In addition, the combined evidence from machine learning and structural modeling identified several specific amino acids that are likely to play a role in binding DNA or RNA, but for which no experimental evidence is currently available.
Comments

This is a proceeding from Pacific Symposium on Biocomputing 13 (2008): 501. Posted with permission.