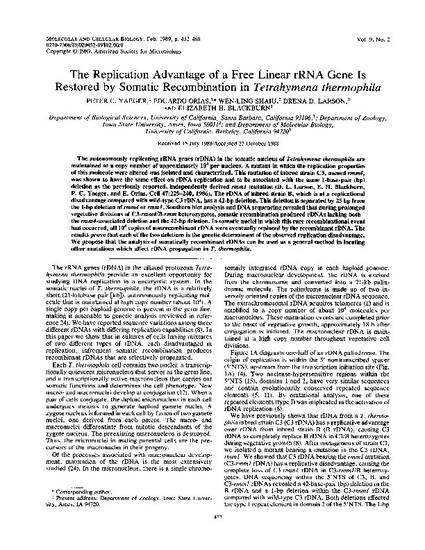 Article
The replication advantage of a free linear rRNA gene is restored by somatic recombination in Tetrahymena thermophila
Molecular and Cellular Biology
Download Find in your library
Document Type
Article
Disciplines
Publication Version
Published Version
Publication Date
DOI
10.1128/MCB.9.2.452
Abstract
The autonomously replicating rRNA genes (rDNA) in the somatic nucleus of Tetrahymena thermophila are maintained at a copy number of approximately 10 per nucleus. A mutant in which the replication properties of this molecule were altered was isolated and characterized. This mutation of inbred strain C3, named rmm4, was shown to have the same effect on rDNA replication and to be associated with the same 1-base-pair (bp) deletion as the previously reported, independently derived rmml mutation (D. L. Larson, E. H. Blackburn, P. C. Yaeger, and E. Orias, Cell 47:229-240, 1986). The rDNA of inbred strain B, which is at a replicational disadvantage compared with wild-type C3 rDNA, has a 42-bp deletion. This deletion is separated by 25 bp from the 1-bp deletion of rmm4 or rmml. Southern blot analysis and DNA sequencing revealed that during prolonged vegetative divisions of C3-rmm4IB-rmm heterozygotes, somatic recombination produced rDNAs lacking both the rmm4-associated deletion and the 42-bp deletion. In somatic nuclei in which this rare recombinational event had occurred, all 104 copies of nonrecombinant rDNA were eventually replaced by the recombinant rDNA. The results prove that each of the two deletions is the genetic determinant of the observed replication disadvantage. We propose that the analysis of somatically recombinant rDNAs can be used as a general method in locating other mutations which affect rDNA propagation in T. thermophila.
Comments