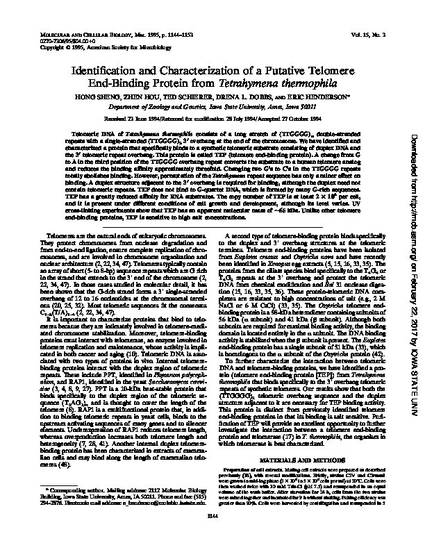 Article
Identification and characterization of a putative telomere end-binding protein from Tetrahymena thermophila
Molecular and Cellular Biology
Download Find in your library
Document Type
Article
Disciplines
Publication Version
Published Version
Publication Date
DOI
10.1128/MCB.15.3.1144
Abstract
Telomeric DNA of Tetrahymena thermophila consists of a long stretch of (TTGGGG)n double-stranded repeats with a single-stranded (TTGGGG)2 3' overhang at the end of the chromosome. We have identified and characterized a protein that specifically binds to a synthetic telomeric substrate consisting of duplex DNA and the 3' telomeric repeat overhang. This protein is called TEP (telomere end-binding protein). A change from G to A in the third position of the TTGGGG overhang repeat converts the substrate to a human telomere analog and reduces the binding affinity approximately threefold. Changing two G's to C's in the TTGGGG repeats totally abolishes binding. However, permutation of the Tetrahymena repeat sequence has only a minor effect on binding. A duplex structure adjacent to the 3' overhang is required for binding, although the duplex need not contain telomeric repeats. TEP does not bind to G-quartet DNA, which is formed by many G-rich sequences. TEP has a greatly reduced affinity for RNA substrates. The copy number of TEP is at least 2 x 10(4) per cell, and it is present under different conditions of cell growth and development, although its level varies. UV cross-linking experiments show that TEP has an apparent molecular mass of approximately 65 kDa. Unlike other telomere end-binding proteins, TEP is sensitive to high salt concentrations.
Comments