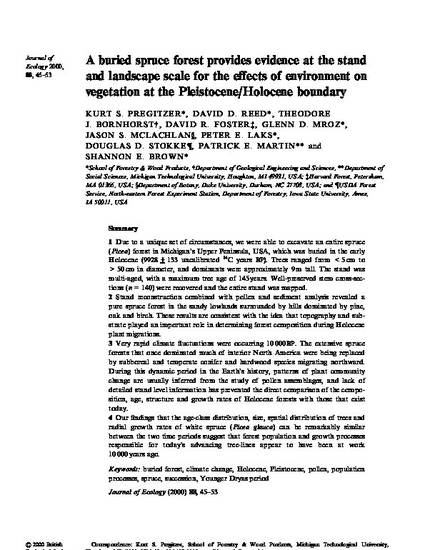 Due to a unique set of circumstances, we were able to excavate an entire spruce (Picea) forest in Michigan's Upper Peninsula, USA, which was buried in the early Holocene (9928 ± 133 uncalibrated 14C years bp). Trees ranged from < 5 cm to > 50 cm in diameter, and dominants were approximately 9 m tall. The stand was multi-aged, with a maximum tree age of 145 years. Well-preserved stem cross-sections (n = 140) were recovered and the entire stand was mapped. Stand reconstruction combined with pollen and sediment analysis revealed a pure spruce forest in the sandy lowlands surrounded by hills dominated by pine, oak and birch. These results are consistent with the idea that topography and substrate played an important role in determining forest composition during Holocene plant migrations. Very rapid climate fluctuations were occurring 10 000 bp. The extensive spruce forests that once dominated much of interior North America were being replaced by subboreal and temperate conifer and hardwood species migrating northward. During this dynamic period in the Earth's history, patterns of plant community change are usually inferred from the study of pollen assemblages, and lack of detailed stand level information has prevented the direct comparison of the composition, age, structure and growth rates of Holocene forests with those that exist today. Our findings that the age-class distribution, size, spatial distribution of trees and radial growth rates of white spruce (Picea glauca) can be remarkably similar between the two time periods suggest that forest population and growth processes responsible for today's advancing tree-lines appear to have been at work 10 000 years ago.

Keywords
Disciplines
Publication Date
Publisher Statement
Works produced by employees of the U.S. Government as part of their official duties are not copyrighted within the U.S. The content of this document is not copyrighted.
Citation Information
Douglas D. Stokke. "A Buried Spruce Forest Provides Evidence at the Stand and Landscape Scale for the Effects of Environment on Vegetation at the Pleistocene/Holocene Boundary" Journal of Ecology Vol. 88 Iss. 1 (2000)
Available at: http://works.bepress.com/douglas_stokke/3/