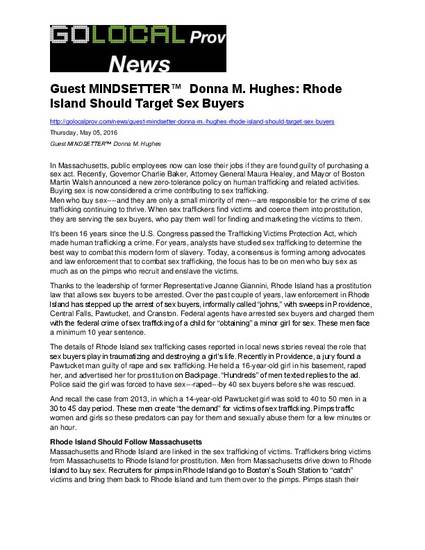 Popular Press
RI Should Target Sex Buyers
GoLocalProv (2016)
Download
Abstract
Men who buy sex----and they are only a small minority of men---are responsible for the crime of sex trafficking continuing to thrive. When sex traffickers find victims and coerce them into prostitution, they are serving the sex buyers, who pay them well for finding and marketing the victims to them.
For years, analysts have studied sex trafficking to determine the best way to combat this modern form of slavery. Today, a consensus is forming among advocates and law enforcement that to combat sex trafficking, the focus has to be on men who buy sex as much as on the pimps who recruit and enslave the victims.
Governor Raimondo, Attorney General Peter Kilmartin, and the mayors of Rhode Island need to implement the same policy as Massachusetts’ officials have just done---and provide the resources to implement it--- to send a strong message that sex trafficking and the buying of sex that supports it won’t be tolerated in Rhode Island.
Keywords
Disciplines
Publication Date
Citation Information
Donna M. Hughes. "RI Should Target Sex Buyers" GoLocalProv (2016)
Available at: http://works.bepress.com/donna_hughes/48/
Creative Commons License