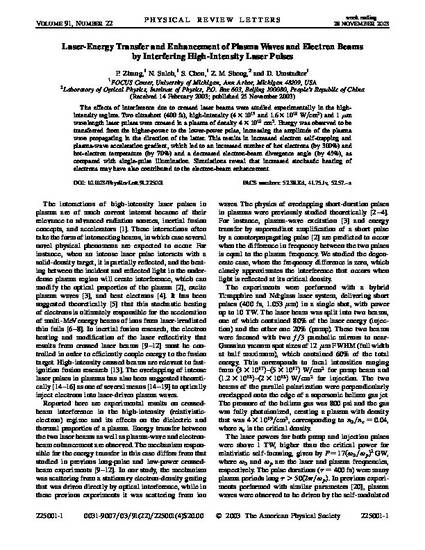 Abstract
The effects of interference due to crossed laser beams were studied experimentally in the high-intensity regime. Two ultrashort (400 fs), high-intensity (4×1017 and 1.6×1018 W/cm2) and1µm wavelength laser pulses were crossed in a plasma of density 4×1019 cm3. Energy was observed to be transferred from the higher-power to the lower-power pulse, increasing the amplitude of the plasma wave propagating in the direction of the latter. This results in increased electron self-trapping and plasma-wave acceleration gradient, which led to an increased number of hot electrons (by 300%) and hot-electron temperature (by 70%) and a decreased electron-beam divergence angle (by 45%), as compared with single-pulse illumination. Simulations reveal that increased stochastic heating of electrons may have also contributed to the electron-beam enhancement.
Citation Information
P. Zhang, N. Saleh, Shouyuan Chen, Z.M. Sheng, et al.. "Laser-Energy Transfer and Enhancement of Plasma Waves and Electron Beams by Interfering High-Intensity Laser Pulses" (2003)
Available at: http://works.bepress.com/donald_umstadter/69/