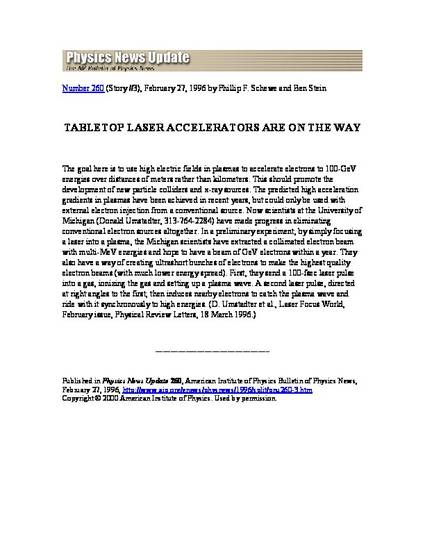 Abstract
The goal here is to use high electric fields in plasmas to accelerate electrons to 100-GeV energies over distances of meters rather than kilometers. This should promote the development of new particle colliders and x-ray sources. The predicted high acceleration gradients in plasmas have been achieved in recent years, but could only be used with external electron injection from a conventional source. Now scientists at the University of Michigan (Donald Umstadter, 313-764-2284) have made progress in eliminating conventional electron sources altogether. In a preliminary experiment, by simply focusing a laser into a plasma, the Michigan scientists have extracted a collimated electron beam with multi-MeV energies and hope to have a beam of GeV electrons within a year. They also have a way of creating ultrashort bunches of electrons to make the highest quality electron beams (with much lower energy spread). First, they send a 100-fsec laser pulse into a gas, ionizing the gas and setting up a plasma wave. A second laser pulse, directed at right angles to the first, then induces nearby electrons to catch the plasma wave and ride with it synchronously to high energies.
Citation Information
Phillip F. Schewe, Ben Stein and Donald P. Umstadter. "TABLETOP LASER ACCELERATORS ARE ON THE WAY" (1996)
Available at: http://works.bepress.com/donald_umstadter/68/