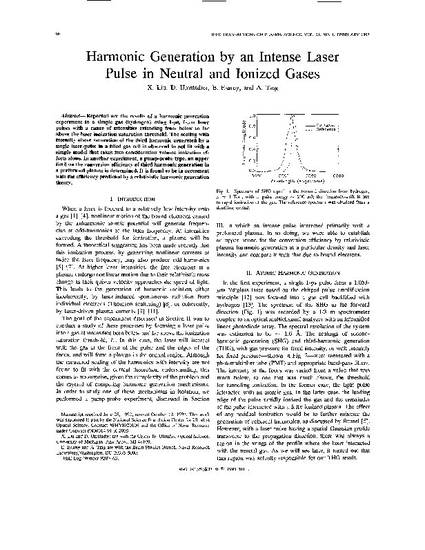 Abstract
Reported are the results of a harmonic generation experiment in a simple gas (hydrogen) using 1-ps, 1-pm laser pulses with a range of intensities extending from below to far above the laser ionization saturation threshold. The scaling with intensity above saturation of the third harmonic generated by a single laser-pulse in a filled gas cell is observed to not fit with a simple model that takes into consideration volume ionization effects alone. In another experiment, a pump-probe type, an upper limit on the conversion efficiency of third harmonic generation in a preformed plasma is determined. It is found to be in agreement with the efficiency predicted by a relativistic harmonic generation theory.
Citation Information
X. Liu, Donald Umstadter, Eric Esarey and A. Ting. "Harmonic Generation by an Intense Laser Pulse in Neutral and Ionized Gases" (1993)
Available at: http://works.bepress.com/donald_umstadter/63/