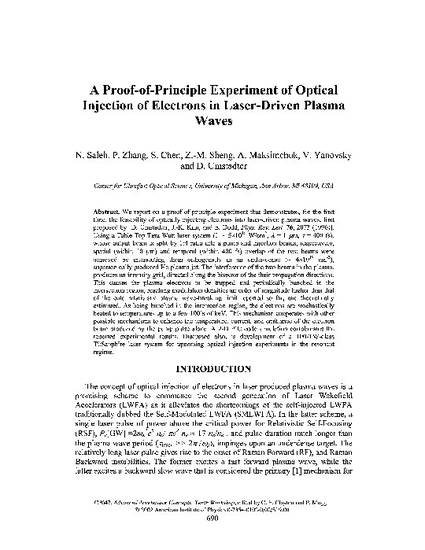 Abstract
We report on a proof-of-principle experiment that demonstrates, for the first time, the feasibility of optically injecting electrons into laser-driven plasma waves, first proposed by [D. Umstadter, J.-K. Kim, and E. Dodd, Phys. Rev. Lett. 76, 2073 (1996)l. Using a Table-Top-Tera Watt laser system (I ~5x1018 W/cm2, λ = 1 μm, τ = 400 fs), whose output beam is split by 1:4 ratio into a pump and injection beams, respectively, spatial (within 10 μm) and temporal (within 400 fs) overlap of the two beams were achieved by intersecting them orthogonally in an under-dense (~ 4x1019 cm-3), supersonically produced He plasma jet. The interference of the two beams in the plasma, produces an intensity grid, directed along the bisector of the their propagation directions. This causes the plasma electrons to be trapped and periodically bunched in the intersection region, reaching modulation densities an order of magnitude higher than that of the cold relativistic plasma wave-breaking limit reported so far, and theoretically estimated. As being bunched in the intersection region, the electrons are stochastically heated to temperatures up to a few 100's of keV. This mechanism cooperates with other possible mechanisms to enhance the temperature, current, and emittance of the electron beam produced by the pump pulse alone. A 2-D PIC code simulation corroborates the reported experimental results. Discussed also, is development of a 100-TW-class Ti:Sapphire laser system for upcoming optical injection experiments in the resonant regime.
Citation Information
N. Saleh, P. Zhang, Shouyuan Chen, Z.-M. Sheng, et al.. "A Proof-of-Principle Experiment of Optical Injection of Electrons in Laser-Driven Plasma Waves" (2002)
Available at: http://works.bepress.com/donald_umstadter/54/