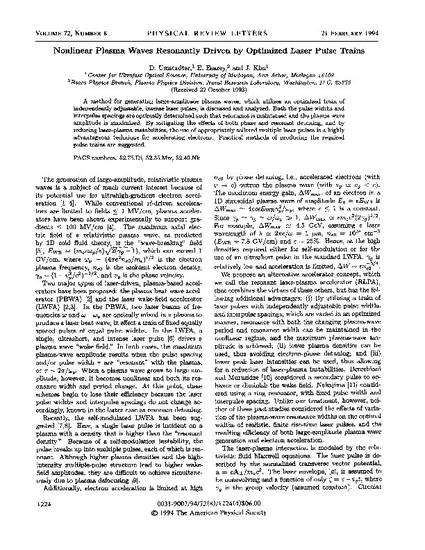 Abstract
Interactions of intense 400-fs laser pulses with a solid target are studied with time-integrated and time-resolved measurements. The latter are accomplished by means of a pump and probe experiment, in which the motion of the critical surface is measured with 250-fs resolution. It is found that when the average electron quiver energy (mvos2/2) becomes comparable to the electron thermal energy (kTe), the ponderomotive force of the high-intensity laser significantly reduces the thermal expansion of a laser plasma. This study is performed in an interesting regime not easily accessible with longer pulse lasers, in which the electron density scale length during the laser pulse was much less than the laser wavelength.
Citation Information
X. Liu and Donald P. Umstadter. "Competition between ponderomotive and thermal forces in short-scale-length laser plasmas" (1992)
Available at: http://works.bepress.com/donald_umstadter/42/