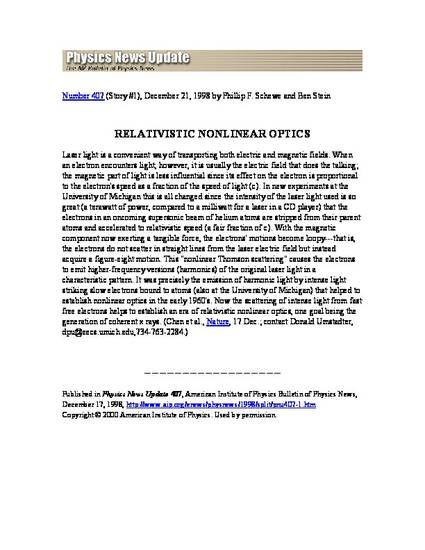 Abstract
Laser light is a convenient way of transporting both electric and magnetic fields. When an electron encounters light, however, it is usually the electric field that does the talking; the magnetic part of light is less influential since its effect on the electron is proportional to the electron's speed as a fraction of the speed of light (c). In new experiments at the University of Michigan this is all changed since the intensity of the laser light used is so great (a terawatt of power, compared to a milliwatt for a laser in a CD player) that the electrons in an oncoming supersonic beam of helium atoms are stripped from their parent atoms and accelerated to relativistic speed (a fair fraction of c). With the magnetic component now exerting a tangible force, the electrons' motions become loopy---that is, the electrons do not scatter in straight lines from the laser electric field but instead acquire a figure-eight motion. This "nonlinear Thomson scattering" causes the electrons to emit higher-frequency versions (harmonics) of the original laser light in a characteristic pattern. It was precisely the emission of harmonic light by intense light striking slow electrons bound to atoms (also at the University of Michigan) that helped to establish nonlinear optics in the early 1960's. Now the scattering of intense light from fast free electrons helps to establish an era of relativistic nonlinear optics, one goal being the generation of coherent x rays.
Citation Information
Phillip F. Schewe, Ben Stein and Donald P. Umstadter. "RELATIVISTIC NONLINEAR OPTICS" (1998)
Available at: http://works.bepress.com/donald_umstadter/40/