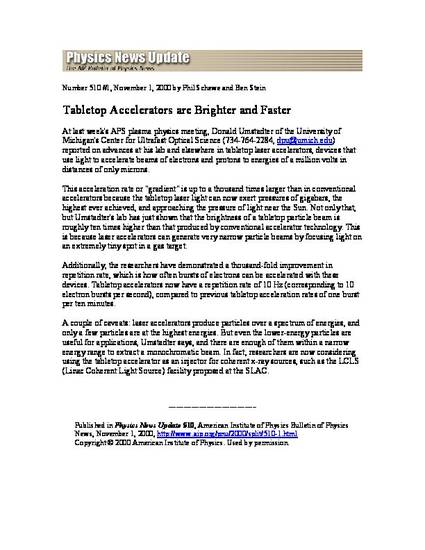 Abstract
At last week's APS plasma physics meeting, Donald Umstadter of the University of Michigan's Center for Ultrafast Optical Science (734-764-2284, dpu@umich.edu) reported on advances at his lab and elsewhere in tabletop laser accelerators, devices that use light to accelerate beams of electrons and protons to energies of a million volts in distances of only microns. This acceleration rate or "gradient" is up to a thousand times larger than in conventional accelerators because the tabletop laser light can now exert pressures of gigabars, the highest ever achieved, and approaching the pressure of light near the Sun. Not only that, but Umstadter's lab has just shown that the brightness of a tabletop particle beam is roughly ten times higher than that produced by conventional accelerator technology. This is because laser accelerators can generate very narrow particle beams by focusing light on an extremely tiny spot in a gas target.
Citation Information
Phil Schewe, Ben Stein and Donald P. Umstadter. "Tabletop Accelerators are Brighter and Faster" (2000)
Available at: http://works.bepress.com/donald_umstadter/17/