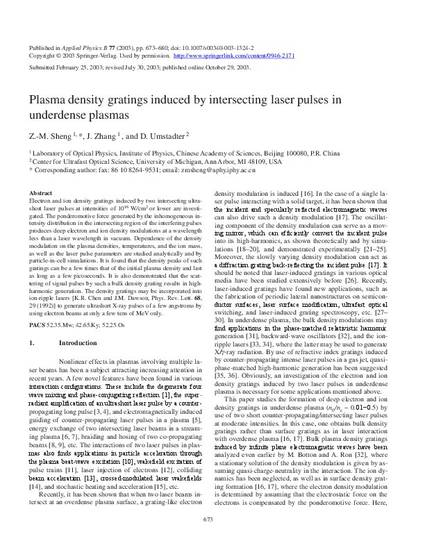 Electron and ion density gratings induced by two intersecting ultrashort laser pulses at intensities of 1016 W/cm2 or lower are investigated. The ponderomotive force generated by the inhomogeneous intensity distribution in the intersecting region of the interfering pulses produces deep electron and ion density modulations at a wavelength less than a laser wavelength in vacuum. Dependence of the density modulation on the plasma densities, temperatures, and the ion mass, as well as the laser pulse parameters are studied analytically and by particle-in-cell simulations. It is found that the density peaks of such gratings can be a few times that of the initial plasma density and last as long as a few picoseconds. It is also demonstrated that the scattering of signal pulses by such a bulk density grating results in high-harmonic generation. The density gratings may be incorporated into ion-ripple lasers [K.R. Chen and J.M. Dawson, Phys. Rev. Lett. 68, 29 (1992)] to generate ultrashort X-ray pulses of a few angstroms by using electron beams at only a few tens of MeV only.