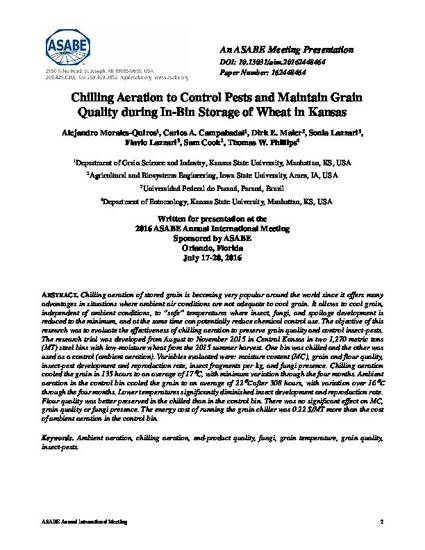 Presentation
Chilling Aeration to Control Pests and Maintain Grain Quality during In-Bin Storage of Wheat in Kansas
Agricultural and Biosystems Engineering Conference Proceedings and Presentations
Download Find in your library
Document Type
Article
Disciplines
Publication Version
Published Version
Publication Date
DOI
10.13031/aim.20162448464
Conference Title
2016 ASABE Annual International Meeting
Conference Date
Geolocation
(28.5383355, -81.37923649999999)
Abstract
Chilling aeration of stored grain is becoming very popular around the world since it offers many advantages in situations where ambient air conditions are not adequate to cool grain. It allows to cool grain, independent of ambient conditions, to “safe” temperatures where insect, fungi, and spoilage development is reduced to the minimum, and at the same time can potentially reduce chemical control use. The objective of this research was to evaluate the effectiveness of chilling aeration to preserve grain quality and control insect-pests. The research trial was developed from August to November 2015 in Central Kansas in two 1,270 metric tons (MT) steel bins with low-moisture wheat from the 2015 summer harvest. One bin was chilled and the other was used as a control (ambient aeration). Variables evaluated were: moisture content (MC), grain and flour quality, insect-pest development and reproduction rate, insect fragments per kg, and fungi presence. Chilling aeration cooled the grain in 135 hours to an average of 17⁰C, with minimum variation through the four months. Ambient aeration in the control bin cooled the grain to an average of 22⁰C after 308 hours, with variation over 16⁰C through the four months. Lower temperatures significantly diminished insect development and reproduction rate. Flour quality was better preserved in the chilled than in the control bin. There was no significant effect on MC, grain quality or fungi presence. The energy cost of running the grain chiller was 0.22 $/MT more than the cost of ambient aeration in the control bin.
Comments