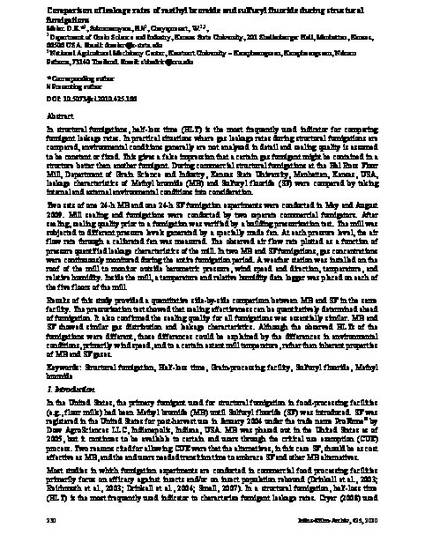 Presentation
Comparison of leakage rates of methyl bromide and sulfuryl fluoride during structural fumigations
10th International Working Conference on Stored Product Protection (2010)
Download
Abstract
In structural fumigations, half-loss time (HLT) is the most frequently used indicator for comparing fumigant leakage rates. In practical situations where gas leakage rates during structural fumigations are compared, environmental conditions generally are not analyzed in detail and sealing quality is assumed to be constant or fixed. This gives a false impression that a certain gas fumigant might be contained in a structure better than another fumigant. During commercial structural fumigations at the Hal Ross Flour Mill, Department of Grain Science and Industry, Kansas State University, Manhattan, Kansas, USA, leakage characteristics of Methyl bromide (MB) and Sulfuryl fluoride (SF) were compared by taking internal and external environmental conditions into consideration. Two sets of one 24-h MB and one 24-h SF fumigation experiments were conducted in May and August 2009. Mill sealing and fumigations were conducted by two separate commercial fumigators. After sealing, sealing quality prior to a fumigation was verified by a building pressurization test. The mill was subjected to different pressure levels generated by a specially made fan. At each pressure level, the air flow rate through a calibrated fan was measured. The observed air flow rate plotted as a function of pressure quantified leakage characteristics of the mill. In two MB and SF fumigations, gas concentrations were continuously monitored during the entire fumigation period. A weather station was installed on the roof of the mill to monitor outside barometric pressure, wind speed and direction, temperature, and relative humidity. Inside the mill, a temperature and relative humidity data logger was placed on each of the five floors of the mill. Results of this study provided a quantitative side-by-side comparison between MB and SF in the same facility. The pressurization test showed that sealing effectiveness can be quantitatively determined ahead of fumigation. It also confirmed the sealing quality for all fumigations was essentially similar. MB and SF sowed similar gas distribution and leakage characteristics. Although the observed HLTs of the fumigations were different, those differences could be explained by the differences in environmental conditions, primarily wind speed, and to a certain extent mill temperature, rather than inherent properties of MB and SF gases.
Keywords
Disciplines
Publication Date
Location
Estoril, Portugal
DOI
10.5073/jka.2010.425.166
Citation Information
D. E. Maier, B. Subramanyam and W. Chayaprasert. "Comparison of leakage rates of methyl bromide and sulfuryl fluoride during structural fumigations" 10th International Working Conference on Stored Product Protection (2010)
Available at: http://works.bepress.com/dirk-maier/39/
Creative Commons License