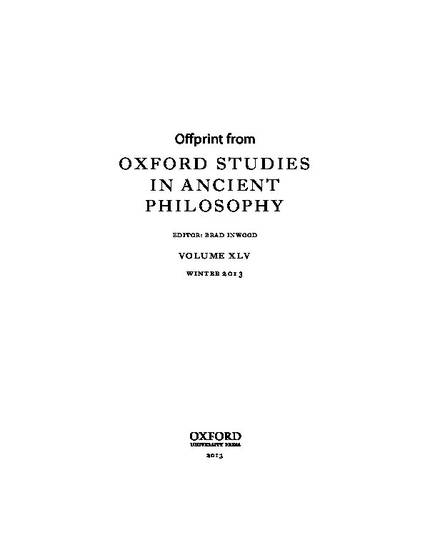 In this paper I examine the role of optimality reasoning in Aristotle’s natural science. By “optimality reasoning” I mean reasoning that appeals to some conception of “what is best” in order to explain why things are the way they are. We are first introduced to this pattern of reasoning in the famous passage at Phaedo 97b8-98a2, where (Plato’s) Socrates invokes “what is best” as a cause (aitia) of things in nature. This passage can be seen as the intellectual ancestor of Aristotle’s own principle, expressed by the famous dictum “nature does nothing in vain but always what is best for the substance from among the possibilities concerning each kind of animal” (Progression of Animals II, 704b12-18). The paper is focused around exploring three questions that arise in connection with Aristotle’s use of this optimality principle: (1) How do we understand the concept of “the best” at work in the principle? (2) How does Aristotle conceive of “the range of possibilities”? And, finally, (3) what role does optimality reasoning play in Aristotle’s natural science? Is it a special form of demonstration in which the optimality principle functions as one of its premises, or is it a heuristic device that helps uncover those causally relevant features of a natural substances that ultimately serve as middle terms in demonstrations? In the final section I return to the comparison between Plato and Aristotle and argue that, while both see the natural world as the product of an optimizing agent and while both see this assumption as licensing a pattern of reasoning that appeals to a certain conception of “the best”, they disagree fundamentally over what the optimization agent is and how it operates. Thus, despite their general agreement, it would be a mistake to think that Aristotle simply took over Plato’s use of optimality reasoning without significant modifications.