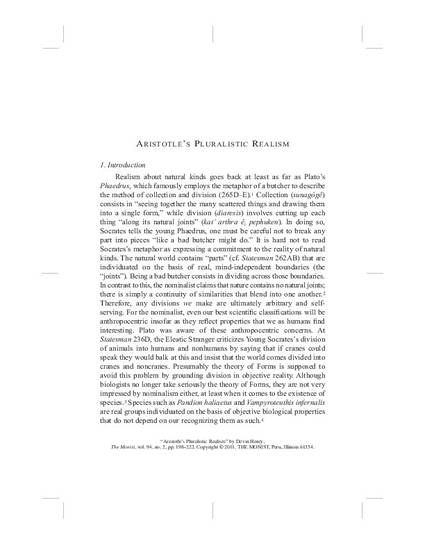 In this paper I explore Aristotle’s views on natural kinds and the compatibility of pluralism and realism, a topic that has generated considerable interest among contemporary philosophers. I argue that, when it came to zoology, Aristotle denied that there is only one way of organizing the diversity of the living world into natural kinds that will yield a single, unified system of classification. Instead, living things can be grouped and regrouped into various cross-cutting kinds on the basis of objective similarities and differences in ways that subserve the explanatory context. Since the explanatory aims of zoology are diverse and variegated, the kinds it recognizes must be equally diverse and variegated. At the same time, there are certain constraints on which kinds can be selected. And those constraints derive more from the causal structure of the world than from the proclivities of the classifier (hence the realism). This distinguishes Aristotle’s version of pluralistic realism from those contemporary versions (like Dupré’s “promiscuous realism”) that treat all or most classifications of a given domain as equally legitimate and not just a sub-set of kinds recognized by the science that studies it. By contrast, Aristotle privileges scientifically important kinds on the basis of their role in causal investigations. On this picture natural kinds are those kinds with the sort of causal structure that allows them to enter into scientific explanations. In the final section I argue that Aristotle’s zoology should remain of interest to philosophers and biologists alike insofar as it combines a pluralistic form of realism with a rank-free approach to classification.