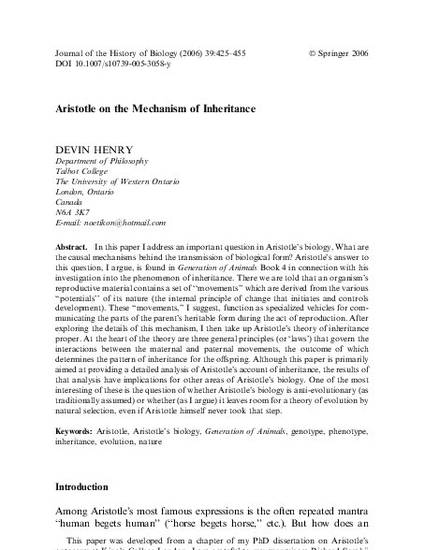 In this paper I address an important question in Aristotle’s biology, What are the causal mechanisms behind the transmission of biological form? Aristotle’s answer to this question, I argue, is found in Generation of Animals Book 4 in connection with his investigation into the phenomenon of inheritance. There we are told that an organism’s reproductive material contains a set of ‘‘movements’’ which are derived from the various ‘‘potentials’’ of its nature (the internal principle of change that initiates and controls development). These ‘‘movements,’’ I suggest, function as specialized vehicles for com- municating the parts of the parent’s heritable form during the act of reproduction. After exploring the details of this mechanism, I then take up Aristotle’s theory of inheritance proper. At the heart of the theory are three general principles (or ‘laws’) that govern the interactions between the maternal and paternal movements, the outcome of which determines the pattern of inheritance for the offspring. Although this paper is primarily aimed at providing a detailed analysis of Aristotle’s account of inheritance, the results of that analysis have implications for other areas of Aristotle’s biology. One of the most interesting of these is the question of whether Aristotle’s biology is anti-evolutionary (as traditionally assumed) or whether (as I argue) it leaves room for a theory of evolution by natural selection, even if Aristotle himself never took that step.

Keywords
Disciplines
Publication Date
Citation Information
Devin Henry. "Aristotle on the Mechanisms of Inheritance" Journal of the History of Biology (2006)
Available at: http://works.bepress.com/devinhenry/10/