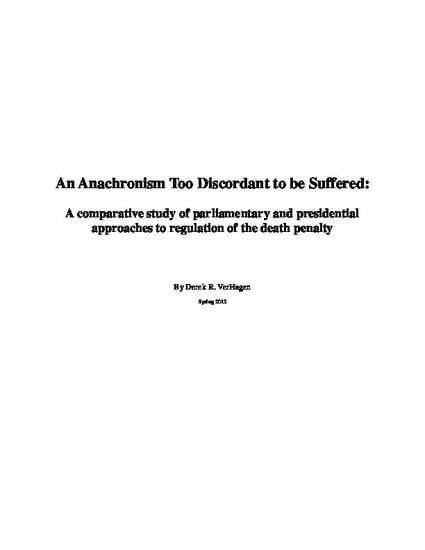 Unpublished Paper
An Anachronism Too Discordant to be Suffered: A comparative study of parliamentary and presidential approaches to regulation of the death penalty
ExpressO (2013)
Download
Abstract

It is well-documented that the United States remains the only western democracy to retain the death penalty and finds itself ranked among the world's leading human rights violators in executions per year. However, prior to the Gregg v. Georgia decision in 1976, ending America's first and only moratorium on capital punishment, the U.S. was well in line with the rest of the civilized world in its approach to the death penalty. This Note argues that America's return to the death penalty is based primarily on the differences between classic parliamentary approaches to regulation and that of the American presidential system. Parliamentary democracies have several characteristics that make them better-suited to abolish the death penalty despite public opinion to the contrary, most important of which is the recognition of substantive constitutional rights to life and human dignity. The United States Constitution, however, primarily provides for procedural protections from state action, such as rights to fair trial, due process, and confrontation of witnesses.This structural distinction disrupts the path to complete abolition because procedural regulation almost always allows for an opportunity for return to the prohibited practice once the deficiencies are corrected. However, complete abolition based on the argument that capital punishment violates substantive rights to life and human dignity is all but irreversible. Ultimately, this Note concludes that the tangled web of procedural regulation of the death penalty in the American presidential system is simply the precursor to complete abolition of capital punishment on substantive grounds similar to that observed in parliamentary governments over the past century—namely via the evolving standards of decency doctrine.

Keywords
Disciplines
Publication Date
Citation Information
Derek R VerHagen. "An Anachronism Too Discordant to be Suffered: A comparative study of parliamentary and presidential approaches to regulation of the death penalty" ExpressO (2013)
Available at: http://works.bepress.com/derek_verhagen/1/