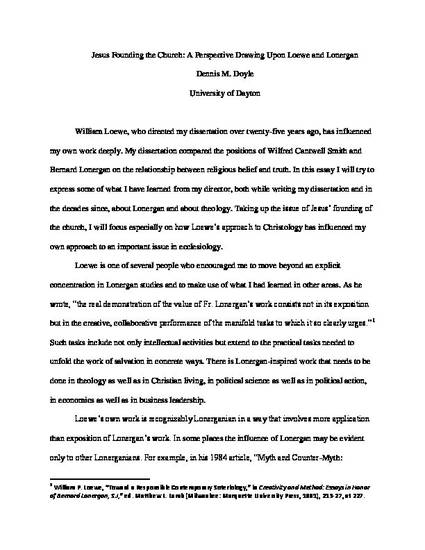 Article
Jesus Founding the Church: A Perspective Drawing upon Loewe and Lonergan
Finding salvation in Christ: Essays on Christology and Soteriology in Honor of William P. Loewe
Download
Document Type
Article
Publication Date
Abstract
William Loewe, who directed my dissertation over twenty-five years ago, has influenced my own work deeply. My dissertation compared the positions of Wilfred Cantwell Smith and Bernard Lonergan on the relationship between religious belief and truth. In this essay I will try to express some of what I have learned from my director, both while writing my dissertation and in the decades since, about Lonergan and about theology. Taking up the issue of Jesus’ founding of the church, I will focus especially on how Loewe’s approach to Christology has influenced my own approach to an important issue in ecclesiology. Loewe is one of several people who encouraged me to move beyond an explicit concentration in Lonergan studies and to make use of what I had learned in other areas. As he wrote, “the real demonstration of the value of Fr. Lonergan’s work consists not in its exposition but in the creative, collaborative performance of the manifold tasks to which it so clearly urges.”1 Such tasks include not only intellectual activities but extend to the practical tasks needed to unfold the work of salvation in concrete ways. There is Lonergan-inspired work that needs to be done in theology as well as in Christian living, in political science as well as in political action, in economics as well as in business leadership. Loewe’s own work is recognizably Lonerganian in a way that involves more application than exposition of Lonergan’s work. In some places the influence of Lonergan may be evident only to other Lonerganians. For example, in his 1984 article, “Myth and Counter-Myth: Irenaeus’ Story of Salvation,” Loewe does not cite a single work by Lonergan. Yet the second sentence begins, “Once theology recognizes its task to be one of mediating between the Christian religion and the world of human culture . . . .”2 Thus an identifiably Lonerganian starting point can be located in the essay. But it is even more evident to anyone connected with Lonergan studies that the entire essay, in which Loewe explores how Irenaeus’ pre-theoretical contribution to christological tradition reflects a mythic form of consciousness that battles against the Gnostic myths, finds its background in Lonergan’s discussion of the ongoing discovery of mind in the chapter “Doctrines” in Method in Theology. Finally, the climactic point of the essay, that “For Irenaeus the cross of Christ provides the key which unlocks the treasure hidden in scripture,” can be connected to a Lonerganian Christology and soteriology that focus on the law of the cross.3 This is not to say that Loewe is in any way concealing the influence of Lonergan in his work. In the article on Irenaeus he cites his own previous article on soteriology that explicitly explains and documents the Lonerganian background of his operating terms and concepts. These two articles can be read together as part of a larger project in soteriology so that the Irenaeus article is really not so cordoned off from its roots as it might first appear to the reader who simply encounters it as a free-standing article in an annual volume of the College Theology Society.
ISBN/ISSN
978-1606086384
Document Version
Postprint
Comments

The document available for download is the author's accepted manuscript, provided for download with the permission from the author and the publisher. Permission documentation is on file.