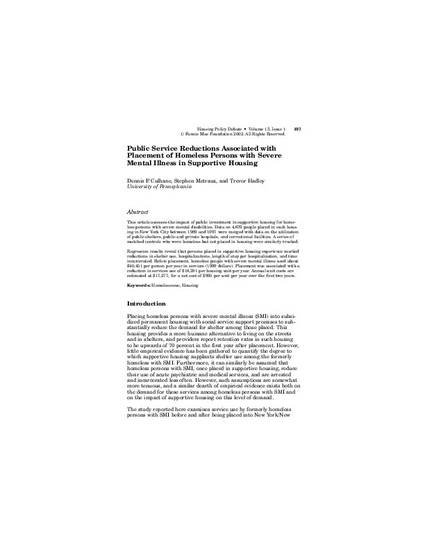 This article assesses the impact of public investment in supportive housing for homeless persons with severe mental disabilities. Data on 4,679 people placed in such housing in New York City between 1989 and 1997 were merged with data on the utilization of public shelters, public and private hospitals, and correctional facilities. A series of matched controls who were homeless but not placed in housing were similarly tracked. Regression results reveal that persons placed in supportive housing experience marked reductions in shelter use, hospitalizations, length of stay per hospitalization, and time incarcerated. Before placement, homeless people with severe mental illness used about $40,451 per person per year in services (1999 dollars). Placement was associated with a reduction in services use of $16,281 per housing unit per year. Annual unit costs are estimated at $17,277, for a net cost of $995 per unit per year over the first two years.

We have contacted the publisher regarding the deposit of this paper in ScholarlyCommons@Penn. No response has been received.