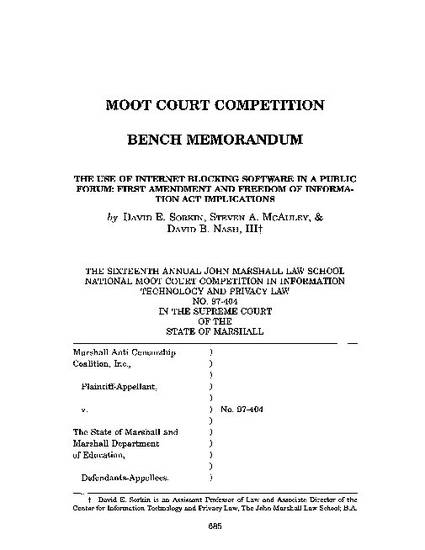 Many public libraries provide patrons with free public-access Internet terminals, largely for accessing information available on the World Wide Web. However, public concern exists over the ability of children who browse the Web without adult supervision to view sexually explicit materials and other inappropriate items. This concern has led to the development of various Internet filtering software programs. Some filtering programs operate by blocking access to documents containing certain words or phrases or combinations thereof. However, more common programs permit access only to documents or sites that appear in a pre-selected, "safe" database or that block access to documents that appear in an "off-limits" database. Some programs that employ the blocking method allow the user to select which categories are to be blocked, while other programs lack this customization capability. If a state enacts a law requiring installation of Internet filtering software on public-access Internet terminals in public libraries in order to protect children from patently offensive material, the constitutionality of that law may be challenged. Such a law will withstand constitutional scrutiny only if it is the least restrictive means available to further a compelling government interest. While the stateþs interest in protecting children from objectionable materials is sufficiently compelling, the method chosen may not be the least restrictive means available, as filtering software using the blocking method filters out a great deal of expression protected by the First Amendment. Also, the installation of filtering software in libraries is similar to the removal of books from a library based on their content, which has also been held to violate the First Amendment. However, libraries make daily decisions as to which materials to purchase, based largely on the content of the materials. Such decisions bear no First Amendment consequences, and filtering materials accessible over the Internet on library-owned computers can be similarly classified as a selection decision rather than as an unconstitutional removal. Finally, if the filtering software employs the blocking method and involves the creation of a database of blocked sites in an "off-limits" list, the list may be subject to disclosure under a Freedom of Information Act request. However, if applicable, an exemption to the Freedom of Information Act may preclude disclosure. Under that exemption, if the list is classified as a trade secret or if the list contains commercial or financial information obtained from a person which is privileged or confidential, then the list is exempt from disclosure.