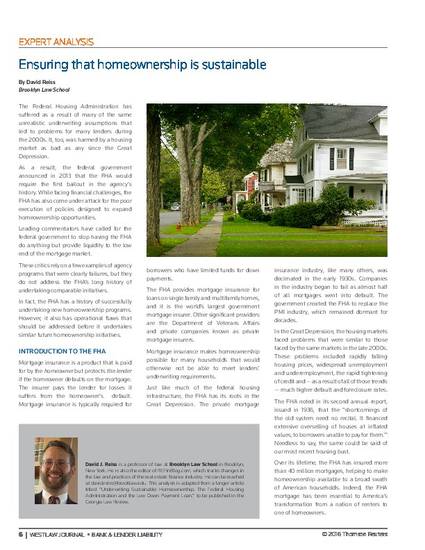 Article
Ensuring That Homeownership Is Sustainable
Westlaw Journal Bank & Lender Liability (2016)
Download Find in your library
Abstract
This short article argues that the Federal Housing Administration has suffered as a result of many of the same unrealistic underwriting assumptions that led to problems for many lenders during the 2000s. It, too, was harmed by a housing market as bad as any since the Great Depression.  As a result, the federal government announced in 2013 that the FHA would require the first bailout in the agency’s history. While facing financial challenges, the FHA has also come under attack for the poor execution of policies designed to expand homeownership opportunities.
Leading commentators have called for the federal government to stop having the FHA do anything but provide liquidity to the low end of the mortgage market.  These critics rely on a few examples of agency programs that were clearly failures, but they do not address the FHA’s long history of undertaking comparable initiatives.   In fact, the FHA has a history of successfully undertaking new homeownership programs. However, it also has operational flaws that should be addressed before it undertakes similar future homeownership initiatives.
Keywords
Disciplines
Publication Date
Citation Information
David J Reiss. "Ensuring That Homeownership Is Sustainable" Westlaw Journal Bank & Lender Liability Vol. 22 Iss. 1 (2016) p. 6 - 8
Available at: http://works.bepress.com/david_reiss/86/
Creative Commons license

This work is licensed under a Creative Commons CC_BY-NC International License.