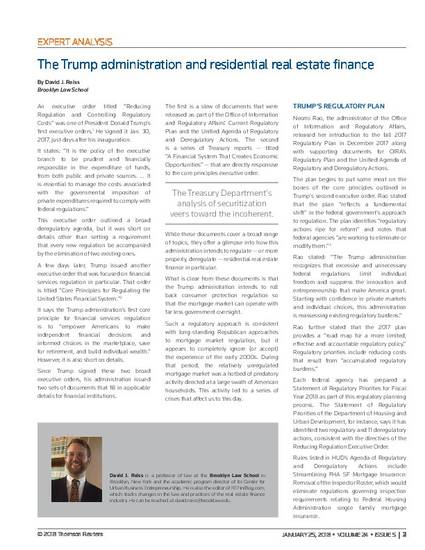 Article
The Trump Administration And Residential Real Estate Finance
Westlaw Journal Derivatives (2018)
Download Find in your library
Abstract
An executive order titled “Reducing Regulation and Controlling Regulatory Costs” was one of President Donald Trump’s first executive orders. He signed it Jan. 30, 2017, just days after his inauguration. It states: “It is the policy of the executive branch to be prudent and financially responsible in the expenditure of funds, from both public and private sources. … It is essential to manage the costs associated with the governmental imposition of private expenditures required to comply with federal regulations.” This executive order outlined a broad deregulatory agenda, but it was short on details other than setting a requirement that every new regulation be accompanied by the elimination of two existing ones.  A few days later, Trump issued another executive order that was focused on financial services regulation in particular. That order is titled “Core Principles for Regulating the United States Financial System.” It says the Trump administration’s first core principle for financial services regulation is to “empower Americans to make independent financial decisions and informed choices in the marketplace, save for retirement, and build individual wealth.” However, it is also short on details.
Since Trump signed these two broad executive orders, his administration issued two sets of documents that fill in applicable details for financial institutions. The first is a slew of documents that were released as part of the Office of Information and Regulatory Affairs’ Current Regulatory Plan and the Unified Agenda of Regulatory and Deregulatory Actions. The second is a series of Treasury reports — titled “A Financial System That Creates Economic Opportunities” — that are directly responsive to the core principles executive order. While these documents cover a broad range of topics, they offer a glimpse into how this administration intends to regulate — or more properly, deregulate — residential real estate finance in particular. What is clear from these documents is that the Trump administration intends to roll back consumer protection regulation so that the mortgage market can operate with far less government oversight.housing finance, mortgage market, deregulation, regulation, securitization, financial regulation, consumer protection, CFPB, Consumer Financial Protection Bureau, FHA, Federal Housing Administration, sustainable homeownership, financial crisis, home ownership
Keywords
Disciplines
Publication Date
Citation Information
David J Reiss. "The Trump Administration And Residential Real Estate Finance" Westlaw Journal Derivatives (2018) p. 3 - 6
Available at: http://works.bepress.com/david_reiss/110/
Creative Commons license