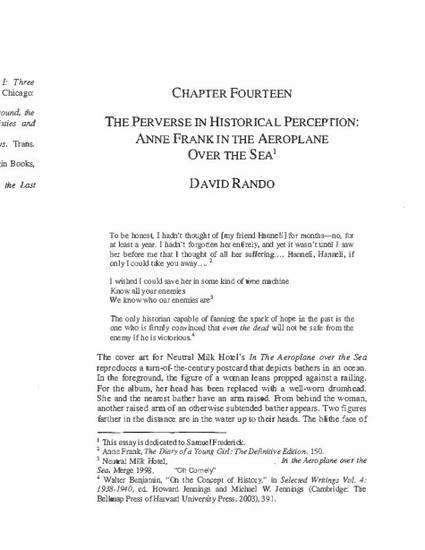 The cover art for Neutral Milk Hotel's In The Aeroplane over the Sea reproduces a turn-of-the-century postcard that depicts bathers in an ocean. In the foreground, the figure of a woman leans propped against a railing. For the album, her head has been replaced with a well-worn drumhead. She and the nearest bather have an arm raised. From behind the woman, another raised arm of an otherwise subtended bather appears. Two figures farther in the distance are in the water up to their heads. The blithe face of the nearest bather looks up toward the woman, whose own face has become a blank. In other words, it is just another weird indie rock album cover. Or so one might be inclined to think before hearing the album. After listening closely to the album, however, the cover art and one's attitude toward it may change in ways that are symptomatic and thematic of the music and lyrics themselves. Then it is difficult to shake the conflicting feelings that the respective figures are either making a blithe and a blank fascist salute or, perhaps more disturbingly, that they are blithely and blankly drowning and hailing the viewer for help, a viewer who probably feels quite powerless to help them. After all, this is a vintage postcard, and if they were drowning, they must have drowned long ago. There must be nothing that we can do. We had better not fall in love with them.