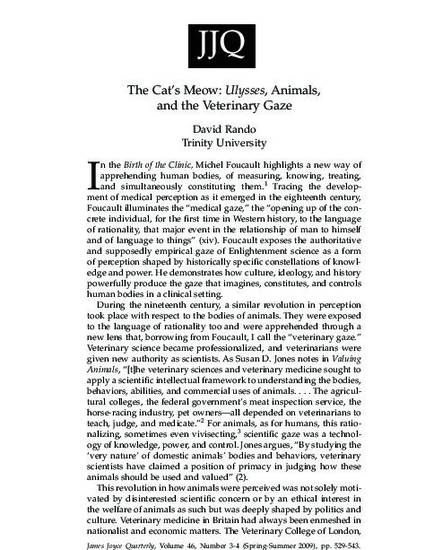 This essay argues that Joyce's representational techniques seek to intervene in the rationalized mode of apprehending animal bodies—here called the veterinary gaze—in order to deconstruct its authority and the barriers it maintains between humans and animals. Joyce's intervention, however, is necessarily a modest one. This is because the extraordinary language acts by which Ulysses would redefine the representation of humans and animals simultaneously reinforce the linguistic basis that maintains the barriers. At the same time, Ulysses evokes a sadness that to some extent redraws the human/animal divide, but this sadness is less an effect of language than it is of silence. Specifically, the article investigates the role of veterinary medicine in early pediatric medicine and connects the sadness that is stereotypically associated with speechless animals to Bloom's incomplete mourning for his silent son Rudy.