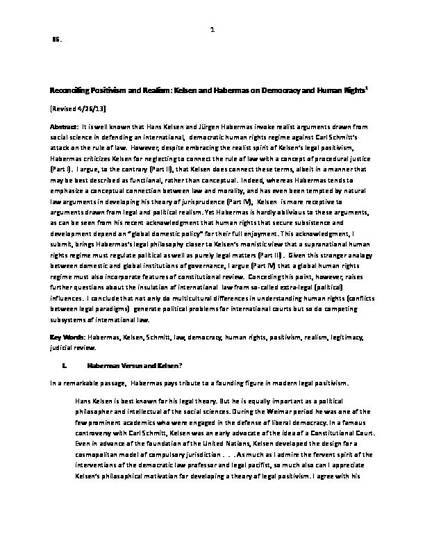 Article
Reconciling Positivism and Realism: Kelsen and Habermas on Democracy and Human Rights
Philosophy & Social Criticism
Download
Document Type
Article
Publication Date
Disciplines
Abstract
It is well known that Hans Kelsen and Jürgen Habermas invoke realist arguments drawn from social science in defending an international, democratic human rights regime against Carl Schmitt’s attack on the rule of law. However, despite embracing the realist spirit of Kelsen’s legal positivism, Habermas criticizes Kelsen for neglecting to connect the rule of law with a concept of procedural justice (Part I). I argue, to the contrary (Part II), that Kelsen does connect these terms, albeit in a manner that may be best described as functional, rather than conceptual. Indeed, whereas Habermas tends to emphasize a conceptual connection between law and morality, and has even been tempted by natural law arguments in developing his theory of jurisprudence (Part IV), Kelsen is more receptive to arguments drawn from legal and political realism. Yet Habermas is hardly oblivious to these arguments, as can be seen from his recent acknowledgment that human rights that secure subsistence and development depend on “global domestic policy” for their full enjoyment. This acknowledgment, I submit, brings Habermas’s legal philosophy closer to Kelsen’s monistic view that a supranational human rights regime must regulate political as well as purely legal matters (Part III). Given this stronger analogy between domestic and global institutions of governance, I argue (Part IV) that a global human rights regime must also incorporate features of constitutional review. Conceding this point, however, raises further questions about the insulation of international law from so-called extra-legal (political) influences. I conclude that not only do multicultural differences in understanding human rights (conflicts between legal paradigms) generate political problems for international courts but so do competing subsystems of international law.
Comments

Author Posting. © Sage, 2013. This is the author's version of the work. It is posted here by permission of Sage for personal use, not for redistribution. The definitive version will be published in Philosophy & Social Criticism (forthcoming).