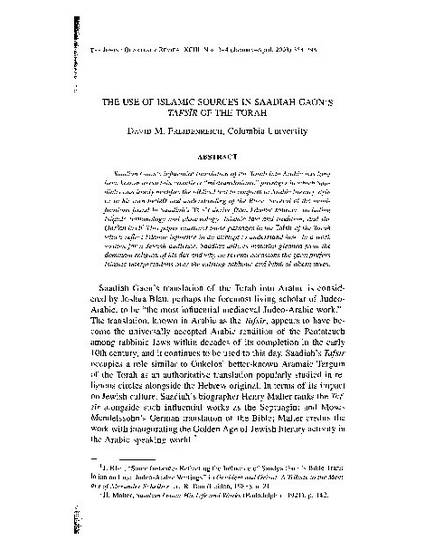 Saadiah Gaon’s influential translation of the Torah into Arabic has long been known to contain countless “mis-translations,” passages in which Saadiah consciously modifies the biblical text to conform to Arabic literary style or to his own beliefs and understanding of the Bible. Several of the modifications found in Saadiah’s Tafsir derive from Islamic sources, including Islamic terminology and phraseology, Islamic law and tradition, and the Quran itself. This paper examines those passages in the Tafsir of the Torah which reflect Islamic influence in an attempt to understand how, in a work written for a Jewish audience, Saadiah utilizes material gleaned from the dominant religion of his day and why on several occasions the gaon prefers Islamic interpretations over the existing rabbinic and biblical alternatives.