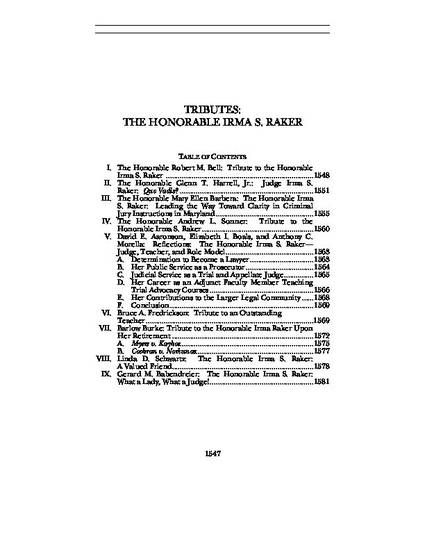 This article is a sketch of Judge Irma S. Raker’s career from her days as a law student at Washington College of Law to her distinguished career as a jurist and teacher. Judge Raker’s first legal job was as an Assistant State’s Attorney in Montgomery County, Maryland, where her appointment as the first woman litigator was a milestone in the local legal community. She was appointed in 1980 to serve as a judge on the District Court for Montgomery County and, in 1982, to serve on the Circuit Court for Montgomery County. Judge Raker decided a number of seminal cases, including Burning Tree Club, Inc. v. Bainum, 501 A.2d 817 (Md. 1985), which was affirmed by the Maryland Court of Appeals. Since 1982 she has participated in the WCL’s Trial Advocacy Program, and is now the Program’s senior adjunct faculty member. She has taught more than five hundred law students civil and criminal trial advocacy skills and is considered one of the WCL’s best teachers. In addition to additional WCL service, such as serving as a Moot Court judge, Judge Raker has greatly contributed to the larger legal community, including service as an elected member of the Board of Governors of the Maryland State Bar Association and as Chair of the ABA Criminal Justice Standards Committee Task Force on Diversion and Special Courts. She is also the recipient of the ABA’s Margaret Brent Award for her contributions to women in the legal profession.