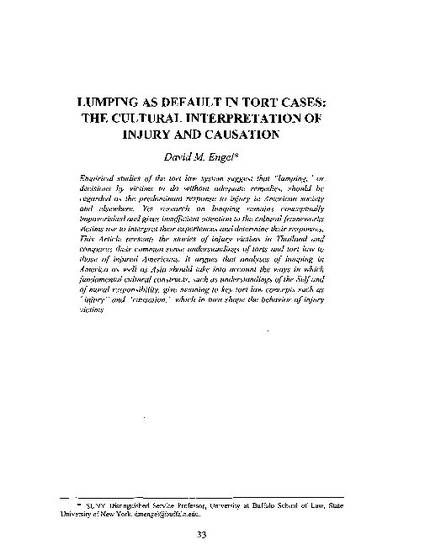 Empirical studies of the tort law system suggest that "lumping," or decisions by victims to do without adequate remedies, should be regarded as the predominant response to injury in American society and elsewhere. Yet research on lumping remains conceptually impoverished and gives insufficient attention to the cultural frameworks victims use to interpret their experiences and determine their responses. This Article presents the stories of injury victims in Thailand and compares their common-sense understandings of torts and tort law to those of injured Americans. It argues that analyses of lumping in America as well as Asia should take into account the ways in which fundamental cultural constructs, such as understandings of the Self and of moral responsibility, give meaning to key tort law concepts such as "injury" and "causation," which in turn shape the behavior of injury victims.