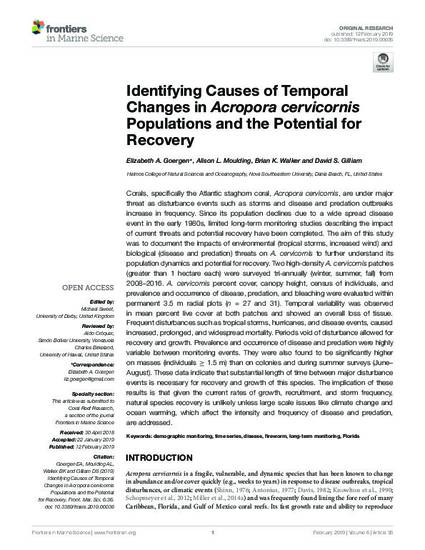 Corals, specifically the Atlantic staghorn coral, Acropora cervicornis, are under major threat as disturbance events such as storms and disease and predation outbreaks increase in frequency. Since its population declines due to a wide spread disease event in the early 1980s, limited long-term monitoring studies describing the impact of current threats and potential recovery have been completed. The aim of this study was to document the impacts of environmental (tropical storms, increased wind) and biological (disease and predation) threats on A. cervicornis to further understand its population dynamics and potential for recovery. Two high-density A. cervicornis patches (greater than 1 hectare each) were surveyed tri-annually (winter, summer, fall) from 2008–2016. A. cervicornis percent cover, canopy height, census of individuals, and prevalence and occurrence of disease, predation, and bleaching were evaluated within permanent 3.5 m radial plots (n = 27 and 31). Temporal variability was observed in mean percent live cover at both patches and showed an overall loss of tissue. Frequent disturbances such as tropical storms, hurricanes, and disease events, caused increased, prolonged, and widespread mortality. Periods void of disturbance allowed for recovery and growth. Prevalence and occurrence of disease and predation were highly variable between monitoring events. They were also found to be significantly higher on masses (individuals ≥ 1.5 m) than on colonies and during summer surveys (June–August). These data indicate that substantial length of time between major disturbance events is necessary for recovery and growth of this species. The implication of these results is that given the current rates of growth, recruitment, and storm frequency, natural species recovery is unlikely unless large scale issues like climate change and ocean warming, which affect the intensity and frequency of disease and predation, are addressed.

© 2019 Goergen, Moulding, Walker and Gilliam. This is an open-access article distributed under the terms of the Creative Commons Attribution License (CC BY). The use, distribution or reproduction in other forums is permitted, provided the original author(s) and the copyright owner(s) are credited and that the original publication in this journal is cited, in accordance with accepted academic practice. No use, distribution or reproduction is permitted which does not comply with these terms.