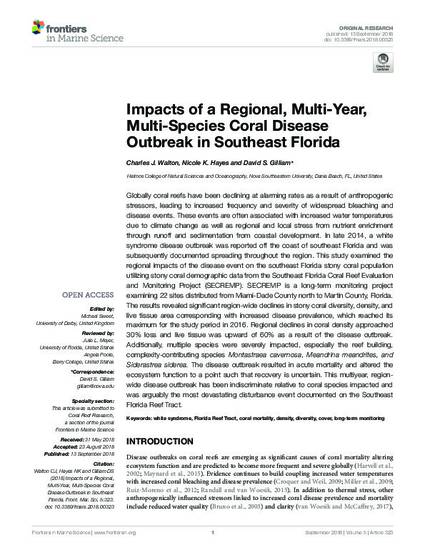 Globally coral reefs have been declining at alarming rates as a result of anthropogenic stressors, leading to increased frequency and severity of widespread bleaching and disease events. These events are often associated with increased water temperatures due to climate change as well as regional and local stress from nutrient enrichment through runoff and sedimentation from coastal development. In late 2014, a white syndrome disease outbreak was reported off the coast of southeast Florida and was subsequently documented spreading throughout the region. This study examined the regional impacts of the disease event on the southeast Florida stony coral population utilizing stony coral demographic data from the Southeast Florida Coral Reef Evaluation and Monitoring Project (SECREMP). SECREMP is a long-term monitoring project examining 22 sites distributed from Miami-Dade County north to Martin County, Florida. The results revealed significant region-wide declines in stony coral diversity, density, and live tissue area corresponding with increased disease prevalence, which reached its maximum for the study period in 2016. Regional declines in coral density approached 30% loss and live tissue was upward of 60% as a result of the disease outbreak. Additionally, multiple species were severely impacted, especially the reef building, complexity-contributing species Montastraea cavernosa, Meandrina meandrites, and Siderastrea siderea. The disease outbreak resulted in acute mortality and altered the ecosystem function to a point such that recovery is uncertain. This multiyear, region-wide disease outbreak has been indiscriminate relative to coral species impacted and was arguably the most devastating disturbance event documented on the Southeast Florida Reef Tract.

© 2018 Walton, Hayes and Gilliam. This is an open-access article distributed under the terms of the Creative Commons Attribution License (CC BY). The use, distribution or reproduction in other forums is permitted, provided the original author(s) and the copyright owner(s) are credited and that the original publication in this journal is cited, in accordance with accepted academic practice. No use, distribution or reproduction is permitted which does not comply with these terms.