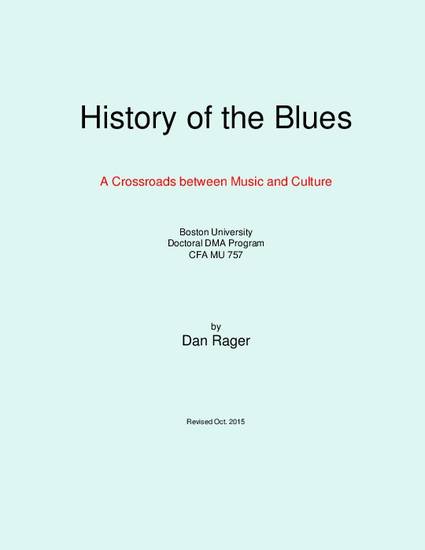 This all inclusive History of the Blues introduction begins as early as 1400, when the first global trading routes began. Two early maps are enclosed from this period showing the direction and locations from which people, food and supplies were moved.

This research presentation illustrates African tribes such as the Arada, Dahomey and Fulani who sang music in their daily rituals and ceremonies long before they were moved to other continents. Early developmental music elements are introduced including spirituals, worksongs, Scottish ballads, Methodist and Baptist hymns, call and response, guttural effects, interpolated vocality, falsetto and blue notes. All of these became pragmatic components from which the blues evolved.

Many photos are shown including the location (Southern Crosses the Dawg) where W. C. Handy (Father of the Blues) first heard a strange music, which later became known as the blues.

The progression of the modern-day 12-Bar Blues pattern is shown along with Alan Lomax, who coined the phrase, ‘Gray-Out’. A map of Highway 61 is shown, where legend has it that Robert Johnson sold his soul for mastery of the guitar.

Once a PowerPoint presentation used in university blues studies, this presentation can be used in any classroom setting as a teaching tool or aid. The document contains photos, maps, references, a word glossary and additional materials pertaining to the study of Blues history.