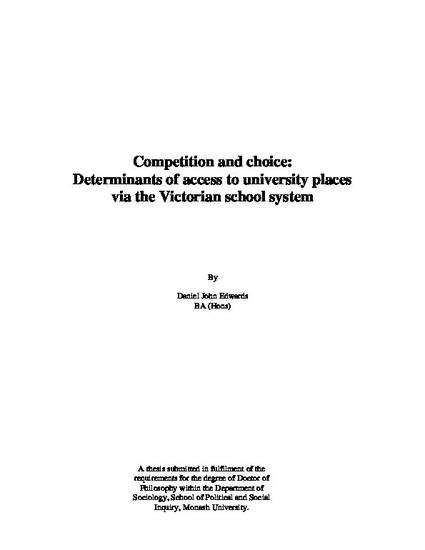 The provision of secondary school education in Victoria has changed substantially over the past 50 years. This thesis examines the consequences of these changes for the academic opportunities of government school students. In the 1950s and 1960s, unprecedented numbers of students and near-universal school participation provided a challenge to governments in relation to education provision. As a result, the comprehensive ideal for organising government secondary schooling was adopted. This system became an important vehicle for providing educational opportunities for many students who previously had limited access to the post-primary years. In the 1970s, funding for schooling in Australia received a considerable boost as a result of educational reforms introduced by the Whitlam Government. The reforms implemented at this time were designed to increase equity in the education system. However, the beneficiaries of these reforms were not just those in the government school system; funding for the non-government schools – the independent and Catholic sectors – was also formalised and increased. These policies changed the dynamics of the education system. From the mid-1970s, as growth in the secondary school aged population stabilised, competition for enrolments between school sectors grew. Competition between schools in terms of academic outcomes also grew as university became an increasingly desirable post-school destination. Since the mid-1990s, this competition has amplified because there was a decline in the number of university places offered in Victoria. This work examines the changing academic outcomes of school completers in Victoria, since the mid-1990s in the context of these dynamics. It shows that the independent sector flourished under these conditions, while the government school comprehensive system struggled. The social, cultural, organisational and financial advantages held by independent schools gave the sector a distinct advantage in the education market. However, increasing competition did not result in a uniform decline in academic achievement across the government school sector during this time. This thesis uses figures extracted from VTAC datasets to show that access to university places has diverged within the government school sector, particularly among schools in Melbourne. By the mid-2000s, this divergence was manifested in a distinct geographical segmentation amongst government schools according to the level of their success in delivering university places. In part, this divide reflects socioeconomic differences between Melbourne suburbs. However, a number of other factors are at play, notably the gradual curriculum specialisation in government schools since the mid-1990s. As a result of the pressures that come with change, competition and choice, the government sector which in the past has facilitated universal secondary education and provided new higher education prospects for many communities in the 1950s, 1960s and 1970s, is now less able to perform this function. This research identifies the factors that have led to this outcome and explores some policy options which might deal with it. Ultimately, it is hoped that the study will help the government system regain its capacity to offer equality of opportunity to students regardless of socioeconomic status or residential location.