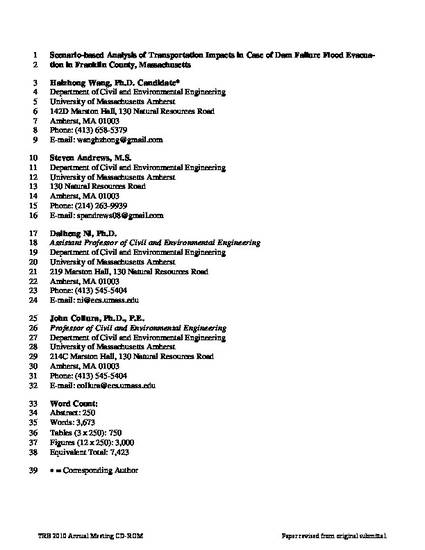 Emergency planning is an important practice that allows government officials and planners to prepare for disasters and to make prompt response s that can save lives and property . One of the foremost concern s during an emergency is to save as many lives as possible. Thus, whethe r people can leave the disaster areas safely and efficiently is a prime consideration in emergency planning and management. Usually, transportation planners use a four - step model to predict sy s- tem - level performance regarding how people move from on e place to another , and to determine the network ’ s weak points and critical areas . In this project, a computer - based software package , TransCAD, is used to evaluate traffic impacts of the evacuation of riverside communities in Franklin County, Massachusetts in the event of flood caused by a hypothetical failure of the Ha r- riman Dam . Th is scenario was partially designed by representatives of Franklin County. The probable maximum flood (PMF) case is considered ; for safety concerns, an evacuation - planning zone (EPZ) is defined as 500 f ee t beyond inundation area. O ne important concern is that peo ple living upstream , near the dam , have much less time to evacu ate than those who live downstream . T he basic consideration behind the model is to evacuate people in a progressive manner in order to take into account the dynamic nature of flood. Using the four - step model together with altered inputs , an analysis is conducted to identify when and where the traffic problems will be the most severe. Following this , general conclusions and recommendations are made.