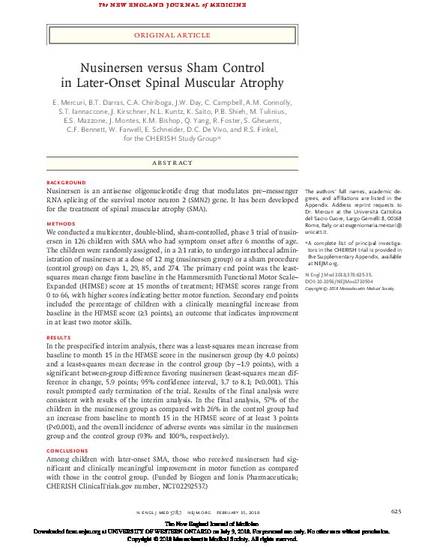 BACKGROUND: Nusinersen is an antisense oligonucleotide drug that modulates pre-messenger RNA splicing of the survival motor neuron 2 ( SMN2) gene. It has been developed for the treatment of spinal muscular atrophy (SMA).

METHODS: We conducted a multicenter, double-blind, sham-controlled, phase 3 trial of nusinersen in 126 children with SMA who had symptom onset after 6 months of age. The children were randomly assigned, in a 2:1 ratio, to undergo intrathecal administration of nusinersen at a dose of 12 mg (nusinersen group) or a sham procedure (control group) on days 1, 29, 85, and 274. The primary end point was the least-squares mean change from baseline in the Hammersmith Functional Motor Scale-Expanded (HFMSE) score at 15 months of treatment; HFMSE scores range from 0 to 66, with higher scores indicating better motor function. Secondary end points included the percentage of children with a clinically meaningful increase from baseline in the HFMSE score (≥3 points), an outcome that indicates improvement in at least two motor skills.

CONCLUSIONS: Among children with later-onset SMA, those who received nusinersen had significant and clinically meaningful improvement in motor function as compared with those in the control group. (Funded by Biogen and Ionis Pharmaceuticals; CHERISH ClinicalTrials.gov number, NCT02292537 .).