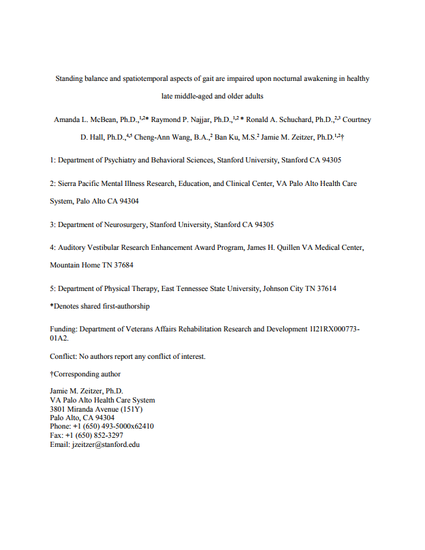 Results: Low-contrast visual acuity significantly decreased with decreasing illuminance conditions (F(3,45) = 98.26, p < 0.001). Our a priori hypothesis was confirmed in that variation in stride velocity and center of pressure path length were significantly worse during the mid-sleep awakening compared to presleep baseline. Lighting conditions during the awakening, however, did not influence these parameters. In exploratory analyses, we found that over one-third of the tested gait and balance parameters were significantly worse at the midsleep awakening as compared to baseline (p < 0.05), and nearly one-quarter had medium to large effect sizes (Cohen d ≥ 0.5; r ≥ 0.3).

Conclusions: Balance and gait are impaired during midsleep awakenings among healthy, late middle-aged and older adults. This impairment is not ameliorated by exposure to room lighting, when compared to dim lights.

This accepted manuscript was published with permission from the journal. It was originally published in the Journal of Clinical Sleep Medicine.