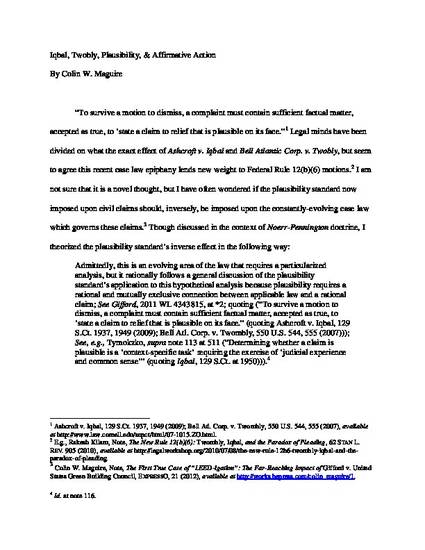 The U.S. Supreme Court seems intent on taking another look at affirmative action in higher education. What could this mean for colleges and universities? This blawg post offers no definitive answers, but points out that arguments exists for both sides of the issue through a recent legal development: Iqbal & Twobly's Plausibility Doctrine. If the Doctrine forces a transative duty on case law, then affirmative action programs' legal rationale - long decried for not making logical sense - could suffer. Conversely, the Court appears to have already used plausibility as a factor in promoting a different type of affirmative action program. The answer may not be clear, but the debate over whether legal rationales are plausible should be part of the Court's analysis in Fisher v. University of Texas.