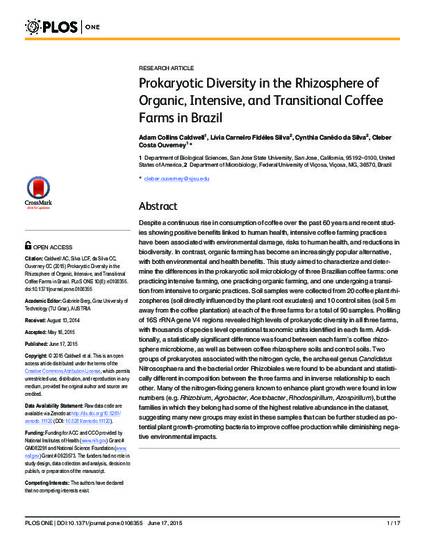 Article
Prokaryotic Diversity in the Rhizosphere of Organic, Intensive, and Transitional Coffee Farms in Brazil
PLoS ONE (2015)
Download Find in your library
Abstract
Despite a continuous rise in consumption of coffee over the past 60 years and recent studies showing positive benefits linked to human health, intensive coffee farming practices have been associated with environmental damage, risks to human health, and reductions in biodiversity. In contrast, organic farming has become an increasingly popular alternative, with both environmental and health benefits. This study aimed to characterize and determine the differences in the prokaryotic soil microbiology of three Brazilian coffee farms: one practicing intensive farming, one practicing organic farming, and one undergoing a transition from intensive to organic practices. Soil samples were collected from 20 coffee plant rhizospheres (soil directly influenced by the plant root exudates) and 10 control sites (soil 5 m away from the coffee plantation) at each of the three farms for a total of 90 samples. Profiling of 16S rRNA gene V4 regions revealed high levels of prokaryotic diversity in all three farms, with thousands of species level operational taxonomic units identified in each farm. Additionally, a statistically significant difference was found between each farm’s coffee rhizosphere microbiome, as well as between coffee rhizosphere soils and control soils. Two groups of prokaryotes associated with the nitrogen cycle, the archaeal genus Candidatus Nitrososphaera and the bacterial order Rhizobiales were found to be abundant and statistically different in composition between the three farms and in inverse relationship to each other. Many of the nitrogen-fixing genera known to enhance plant growth were found in low numbers (e.g. Rhizobium, Agrobacter, Acetobacter, Rhodospirillum, Azospirillum), but the families in which they belong had some of the highest relative abundance in the dataset, suggesting many new groups may exist in these samples that can be further studied as potential plant growth-promoting bacteria to improve coffee production while diminishing negative environmental impacts.
Keywords
Disciplines
Publication Date
DOI
10.1371/journal.pone.0106355
Publisher Statement
Published in PLoS ONE and available online here.
Raw data code are available via Zenodo at http://dx.doi.org/10.5281/zenodo.11120
Citation Information
Adam Collins Caldwell, Livia Carneiro Fidéles Silva, Cynthia Canêdo da Silva and Cleber C. Ouverney. "Prokaryotic Diversity in the Rhizosphere of Organic, Intensive, and Transitional Coffee Farms in Brazil" PLoS ONE Vol. 10 Iss. 6 (2015) ISSN: 1932-6203
Available at: http://works.bepress.com/cleber_ouverney/12/
Creative Commons license