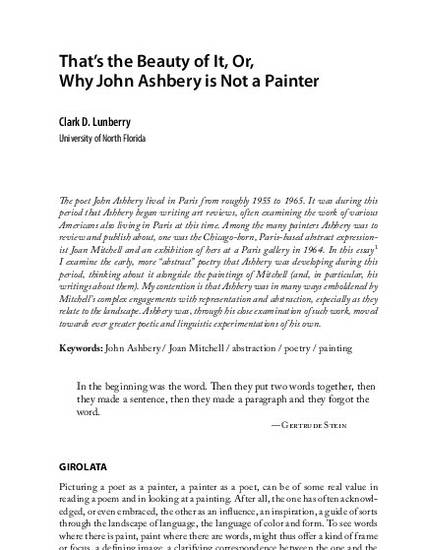 Article
That’s the Beauty of It, Or, Why John Ashbery is Not a Painter
English Faculty Publications
Download Find in your library
Document Type
Article
Publication Date
Disciplines
Abstract

The poet John Ashbery lived in Paris from roughly 1955 to 1965. It was during this period that Ashbery began writing art reviews, often examining the work of various Americans also living in Paris at this time. Among the many painters Ashbery was to review and publish about, one was the Chicago-born, Paris-based abstract expressionist Joan Mitchell and an exhibition of hers at a Paris gallery in 1964. In this essay I examine the early, more ““abstract”” poetry that Ashbery was developing during this period, thinking about it alongside the paintings of Mitchell (and, in particular, his writings about them). My contention is that Ashbery was in many ways emboldened by Mitchell's complex engagements with representation and abstraction, especially as they relate to the landscape. Ashbery was, through his close examination of such work, moved towards ever greater poetic and linguistic experimentations of his own.

Citation Information
Clark Lunberry. "That’s the Beauty of It, Or, Why John Ashbery is Not a Painter" (2011)
Available at: http://works.bepress.com/clark_lunberry/12/