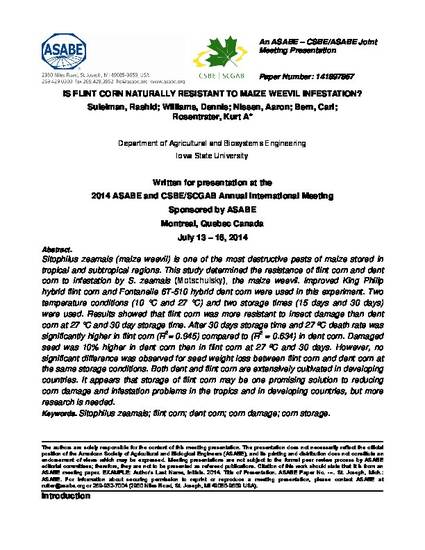 Sitophilus zeamais (maize weevil) is one of the most destructive pests of maize stored in tropical and subtropical regions. This study determined the resistance of flint corn and dent corn to infestation by S. zeamais (Motschulsky), the maize weevil. Improved King Philip hybrid flint corn and Fontanelle 6T-510 hybrid dent corn were used in this experiment. Two temperature conditions (10 °C and 27 °C) and two storage times (15 days and 30 days) were used. Results showed that flint corn was more resistant to insect damage than dent corn at 27 °C and 30 day storage time. After 30 days storage time and 27 ºC death rate was significantly higher in flint corn (R2 = 0.945) compared to (R2 = 0.634) in dent corn. Damaged seed was 10% higher in dent corn then in flint corn at 27 ºC and 30 days. However, no significant difference was observed for seed weight loss between flint corn and dent corn at the same storage conditions. Both dent and flint corn are extensively cultivated in developing countries. It appears that storage of flint corn may be one promising solution to reducing corn damage and infestation problems in the tropics and in developing countries, but more research is needed.