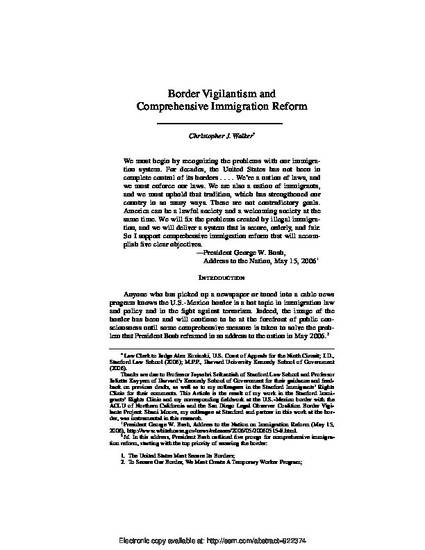 While many actors and conditions contribute to the problems at the border, one set of actors has been unexplainably missing from the literature and policy analysis: border vigilantes. These vigilantes have painted the border as a dangerous locus of criminal and terrorist activity, necessitating concerned citizen sentinels. They have blitzed the public with portrayals about the number of migrants crossing the border illegally and the need for law enforcement to increase border protection. Their message is powerful because they back their rhetoric with action: these individuals camp out near popular desert border-crossing points, document the rate of undocumented migration, and even turn away and/or turn in migrants to the U.S. Border Patrol and local law enforcement. Border vigilantes claim to do the work that the government is unwilling, or at least unable, to do effectively: protect America from the security threats of a permeable border and preserve the rule of law.

In this paper, border vigilantism is put under the microscope. Part I explores the history and current state of the border and the role of vigilantes in promoting border reform and preventing undocumented migrants from entering the United States. Part II looks at the legal rights that vigilantes have when conducting their military-like operations at the border - in particular, the rights they have to detain migrants under state citizen's arrest laws. These laws are particularly important in light of current comprehensive immigration reform proposals; i.e., an inadvertent byproduct of criminalizing border-crossing and illegal presence, as Part II details, is that such criminalization would open the floodgates for vigilantes to arrest any border crossers under any circumstances. Part III proposes reforms - including both legislative approaches and private initiatives - to balance the border vigilantes' expressive rights with the American value to treat others with dignity.