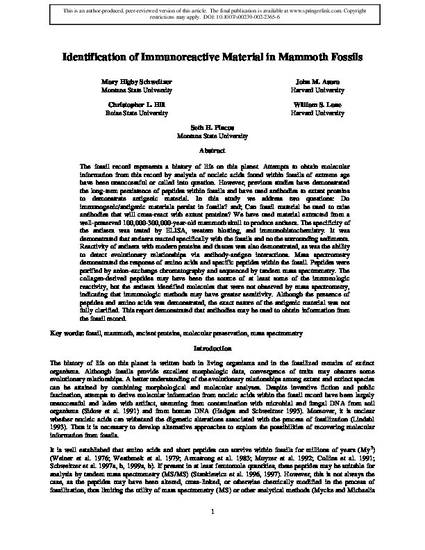 The fossil record represents a history of life on this planet. Attempts to obtain molecular information from this record by analysis of nucleic acids found within fossils of extreme age have been unsuccessful or called into question. However, previous studies have demonstrated the long-term persistence of peptides within fossils and have used antibodies to extant proteins to demonstrate antigenic material. In this study we address two questions: Do immunogenic/antigenic materials persist in fossils? and; Can fossil material be used to raise antibodies that will cross-react with extant proteins? We have used material extracted from a well-preserved 100,000-300,000-year-old mammoth skull to produce antisera. The specificity of the antisera was tested by ELISA, western blotting, and immunohistochemistry. It was demonstrated that antisera reacted specifically with the fossils and no the surrounding sediments. Reactivity of antisera with modern proteins and tissues was also demonstrated, as was the ability to detect evolutionary relationships via antibody-antigen interactions. Mass spectrometry demonstrated the response of amino acids and specific peptides within the fossil. Peptides were purified by anion-exchange chromatography and sequenced by tandem mass spectrometry. The collagen-derived peptides may have been the source of at least some of the immunologic reactivity, but the antisera identified molecules that were not observed by mass spectrometry, indicating that immunologic methods may have greater sensitivity. Although the presence of peptides and amino acids was demonstrated, the exact nature of the antigenic material was not fully clarified. This report demonstrated that antibodies may be used to obtain information from the fossil record.

This is an author-produced, peer-reviewed version of this article. The final publication is available at www.springerlink.com. Copyright restrictions may apply. DOI: 10.1007/s00239-002-2365-6