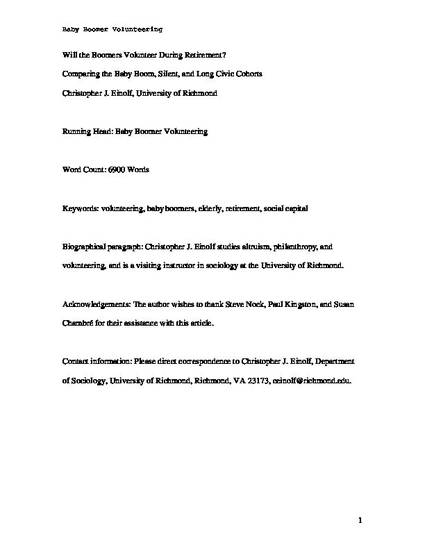 Data from the 1995 and 2005 waves of the Midlife in the United States panel study were used to compare rates of volunteering among the baby boomers with earlier cohorts and to predict boomers’ future volunteering. When age was kept constant through the use of panel data, the first baby boom cohort (born 1946 to 1955) did more volunteering than did the “silent” cohort (born 1936 to 1945), and the silents volunteered more than did the “long civic” cohort (born 1926 to 1935). The author generated regression equations that used nine 1995 variables to predict 2005 volunteering and used the boomers’ 2005 values on these variables to predict their 2015 volunteering. These equations slightly predict higher volunteering among the boomers in 2015 than the silents did in 2005. This result, combined with the large size of the boomer cohort, indicates that the total number of elderly volunteers will probably increase in the next decade.