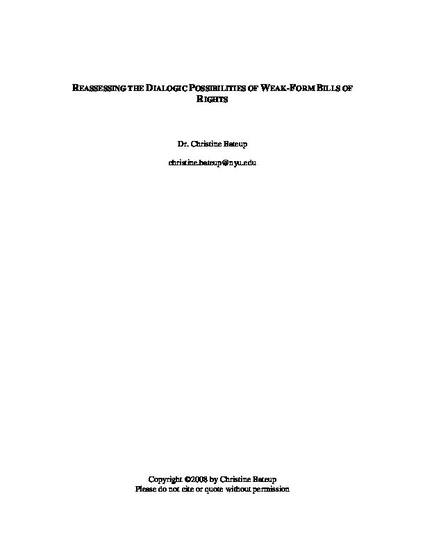 In recent years, weak-form bills of rights have generated much excitement in contemporary constitutional scholarship because they are believed to create a new balance between parliamentary and judicial supremacy based on inter-branch “dialogue” between courts and legislatures. Few scholars, however, have examined the foundational question of whether judges and legislators can actually be expected to behave in a way that realizes the dialogic potential of weak-form instruments. This Article takes a new approach to this question, applying the insights of positive theory to engage in a comprehensive assessment of the behavior we can realistically expect of courts and legislatures in both strong- and weak-form systems of judicial review. To the extent that there are discernable differences between systems regarding how the judiciary and the legislature interact, the Article claims that this behavior is more likely to be driven by the existence of structural and/or strategic impediments to effective political action in a particular constitutional system, rather than by any normative desire that judges and legislators may have to engage in inter-branch “dialogue.” This analysis does not lead to the conclusion, however, that the concept of dialogue should be completely discarded. Instead, the Article takes its positive analysis one step further to claim that weak-form theorists have simply been looking for dialogue in the wrong place. In fact, all systems of judicial review, both strong- and weak-form, should be understood as generating a broader form of society-wide dialogue between the judiciary, the political branches and the people about the meaning and interpretation of fundamental rights.